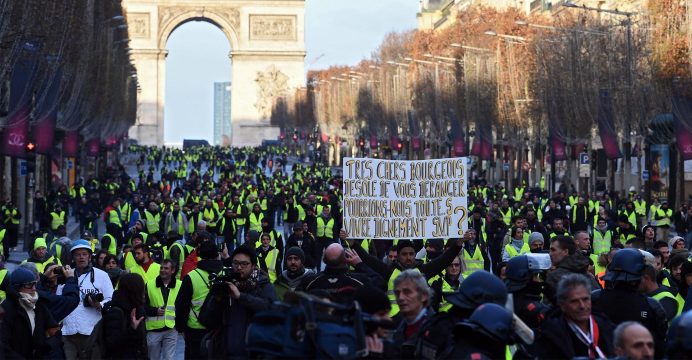 Clad in their luminous road safety jackets, dozens of demonstrators — who accuse President Emmanuel Macron of only looking out for the rich — gathered at dawn on the Champs-Elysees, the scene last Saturday of the worst rioting in Paris for decades.

“We had to come to Paris to be heard,” said protester Herve Benoit, arriving with three friends from the Dordogne in western France.

He called on the government to boost people’s spending power and increase taxes on the wealthiest.

Some 8,000 police were deployed, carrying out checks on people arriving at
train stations and at protest hotspots such as the Champs-Elysees and
Bastille monument.

A source close to the operation told AFP that at least 34 people were
arrested for carrying masks, hammers, slingshots rocks that could be used to attack police.

Shops, museums, the Eiffel Tower and many metro stations were closed as
much of the city-centre went on effective lockdown. Top-flight football
matches and concerts were cancelled.

Last weekend’s violence, which saw some 200 cars torched and the Arc de
Triomphe vandalised, shook France and plunged Macron’s government into its deepest crisis so far.

Interior Minister Christophe Castaner said he expected “only a few thousand people” to descend on Paris after the 8,000 protesters counted last weekend, “but among them are ultraviolent individuals”.

“These past three weeks have produced a monster that its creators no longer control,” Castaner said, vowing “zero tolerance” towards those aiming to wreak further destruction.

Prime Minister Edouard Philippe on Friday evening met a delegation of self-
described “moderate” yellow vests who have urged people not to join the
protests.

After the a spokesman from the movement, Christophe Chalencon, said Philippe had “listened to us and promised to take our demands to the president”.

“Now we await Macron. I hope he will speak to the people of France as a father, with love and respect and that he will take strong decisions,” he said.

Philippe said some 89,000 police were being mobilised nationwide, with a
dozen armoured vehicles deployed in Paris for the first time in decades.