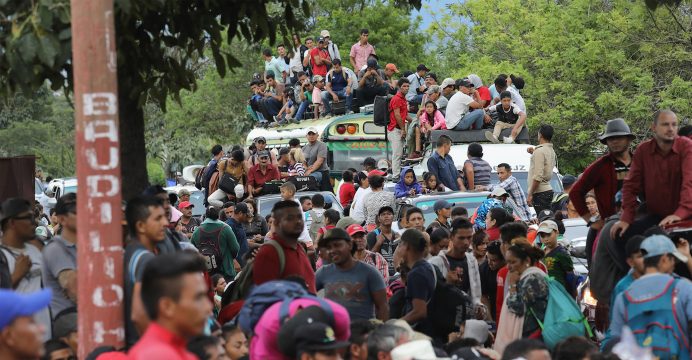 US shuts border post as migrants try to cross from Mexico

US officials briefly closed a border crossing in southern California on Sunday after hundreds of migrants, part of the “caravan” condemned by President Donald Trump, tried to breach a fence from the Mexican city of Tijuana, authorities announced.

The dramatic shutdown took place only three days after Trump threatened to close the “whole border” with Mexico if “it gets to a level where we’re going to lose control or people are going to start getting hurt.”

Border officials in San Diego, California, said on Twitter that they had temporarily closed the San Ysidro crossing point — one of the busiest between the two countries — to both vehicular and pedestrian traffic.

The order was lifted some hours later.

Mexican Interior Minister Alfonso Navarrete accused some of the migrants of attempting the Tijuana crossing in a “violent way.”

“We are going to act and proceed to their deportation,” he told the Milenio television network, adding: “Far from helping the caravan, they are hurting it.”

Video clips posted on Twitter showed large numbers of migrants dashing across a shallow concrete waterway toward the border. Several thousand migrants, mostly from Central America, have been gathering in Tijuana in hopes of entering the US.

Secretary of the US Department of Homeland Security (DHS) Kirstjen Nielsen later issued a statement accusing the migrants of seeking to harm border patrol personnel “by throwing projectiles at them.”

“As I have continually stated, DHS will not tolerate this type of lawlessness and will not hesitate to shut down ports of entry for security and public safety reasons,” she said, adding the US would “seek to prosecute” offenders.