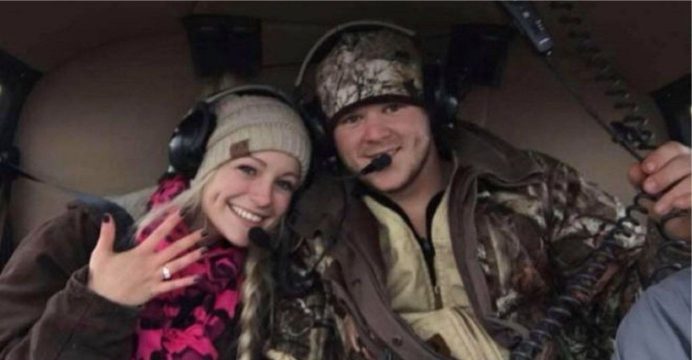 A young newlywed couple from Texas were killed when a helicopter carrying them away from their own wedding crashed late on Saturday night, according to officials.

Will Byler and Bailee Ackerman Byler were both students at Sam Houston State University. Their deaths were first reported by the student newspaper. The crash occurred near Uvalde, about 85 miles (135km) west of San Antonio, reports BBC.

On social media, wedding attendees have been posting their condolences in the captions of wedding photos.

“I’m absolutely devastated!” wrote one friend on Facebook, adding that the pilot of the aircraft was also killed.

In a statement, the university’s student president said the married couple will “always be remembered by their kind hearts and uplifting spirits”.

Another friend wrote on Instagram: “I have peace in the fact that you left this earth so full of happiness and love. How awesome to spend your honeymoon with Jesus.

“So thankful we got to spend these last few days with y’all. Our hearts hurt now, but we know this is not forever.”

The two were married for just over an hour before their helicopter crashed on the Byler family’s ranch in southern Texas.

According to university newspaper the Houstonian, Will Byler had been studying agricultural engineering and was a member of the school’s rodeo team.

Bailee Ackerman Byler was studying agricultural communication. Both were in their final year at university.

According to the National Transportation Safety Board, the accident involved a Bell 206B helicopter.

The wreckage from the crash was discovered on Sunday morning. Local police say there were multiple fatalities, but have not formally named the victims.

A wedding website showed a statement from the company on Monday saying: “Our deepest sympathies and thoughts are with this family at their great loss.

“We know both families appreciate all your love, support and kindness during this time.”

Pilot Gerald Green Lawrence has also been identified as among the dead. His step-daughter told reporters that he was a captain in the Army and had served in Vietnam.

Gerald Green Lawrence has been identified as the pilot in the helicopter crash that killed 2 newlyweds near Uvalde, Texas, just an hour and a half after the wedding. https://t.co/qV6zRjHDil pic.twitter.com/cI3nXaH4Wi