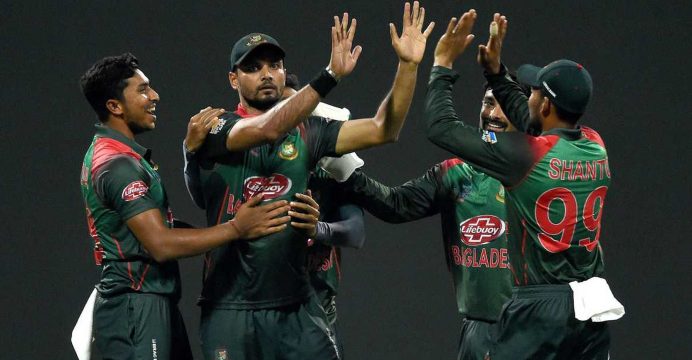 Chasing a winning target of 272 runs set by Bangladesh, Zimbabwe found the chase stiff and eventually restricted at 243 for 9 in 50 overs. It was their 11th successive loss against Bangladesh.

Cephas Zhuwao (35) and skipper Hamilton Masakadza (21), however, gave Zimbabwe a good start contributing 48-run for the opening stand but the rests failed to carry the innings losing wickets in regular intervals in the face of tight bowling attacks by the Tigers’ bowlers.

Sean Williams (50 n.o) and Kyle Jarvis (37), however, added 67 runs for the eight wicket stand but it merely helped to reduce the defeat margin. 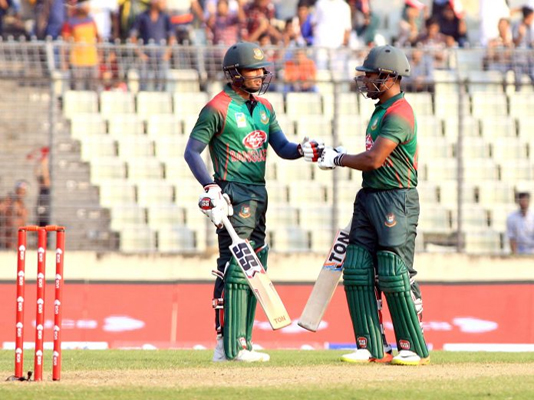 Kyle Jarvis (37), Peter Moor (26) and Craig Ervine (24) got a good start but could not convert those into big knocks.

Mehidy Hasan was the pick of Bangladesh bowler as he grabbed three Zimbabwean wickets conceding 46 runs. He was well supported by Nazmul Islam took two wickets for 38 runs.

Earlier, opener Imrul Kayes scored his third career best century to steer Bangladesh to post a challenging total of 271 for 8 from allotted 50 overs against Zimbabwe.

Kayes, who completed his third ODI hundred today, blazed 144-run off 140-ball laced with 13 boundaries and three over boundaries to rescue Bangladesh after the initial damage.

The left handed batsman Kayes also received an ample support from young all-rounder Mohammad Saifuddin who also hit maiden half century scoring 50 runs off 69 balls that studded with three boundaries and one over boundary.

Things did not go well with Bangladesh’s after the host lost two quick wickets in the beginning of batting power play after the Tigers opted to bat first.

The visitors missed a run-out chance and dropped a catch, which could have sent both the of the Tigers’ openers Liton Das and Imrul Kayes.

However, it didn’t take them long to get the breakthrough as Liton (4) and Fazle Mahmud Rabbi (0) were sent back by pacer Tendai Chatara in the last ball of the fifth over.

Opener Kayes then taking with Mushfiqur Rahim added 49-run for the third wicket stand to bring the situation under control, but Brandon Mavuta again struck on Bangladesh innings taking the crucial wicket of Mushfiqur (15) who gave a back catch to wicket keeper Brendan Taylor, leaving again Bangladesh in trouble.

Kayes kept his nerve cool to complete his half century sharing a crucial 71-run for the fourth wicket stand with Mohammad Mithun, who contributed priceless 37 runs before he was removed by Kyle Jarvis.

Imrul Kayes of Bangladesh was named the player of the match for his impressive batting performance.

Earlier, Bangladesh batsman Fazle Mahmud has been handed his international debut for the Tigers.

On the other hand, Sikandar Raza and Chepas Zhuwao have replaced Solomon Mire and Elton Chigumbura for the visiting side.

The two teams will now move to Chittagong to play the remaining two ODIs scheduled to be held on October 24 and 26 at Zahur Ahmed Chowddhury Stadium.