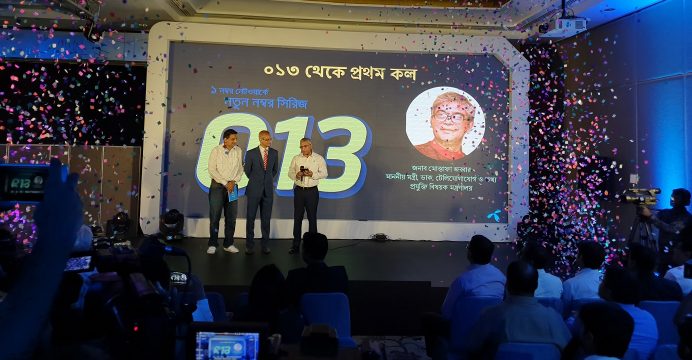 Grameenphone today turns another page in its proud history of serving the people of Bangladesh as it crosses another major milestone with the introduction of a new number series ‘013,’ alongside the existing ‘017’ series.

The new number series was unveiled today at a local hotel by Brig. Gen. Md. Mustafa Kamal, Director General (E&O), BTRC. Grameenphone’s Deputy CEO and CMO Yasir Azman, Chief Corporate Affairs Officer Mahmud Hossain and other senior officials of the company were present on the occasion, along with the representatives from the media. The first official call of 013 has been made by Yasir Azman to Telecom Minister Mr. Mustafa Jabbar.

During the telephone conversation, the minister said, “I congratulate you for the courage you have shown while spreading the network, I believe it will not be difficult for you to maintain quality for the huge number of customers you have.”

The chief guest congratulated Grameenphone for being able to launch the ‘013’ number series within a short time and hoped the company will ‘maintain the same quality of service that it is known for’. 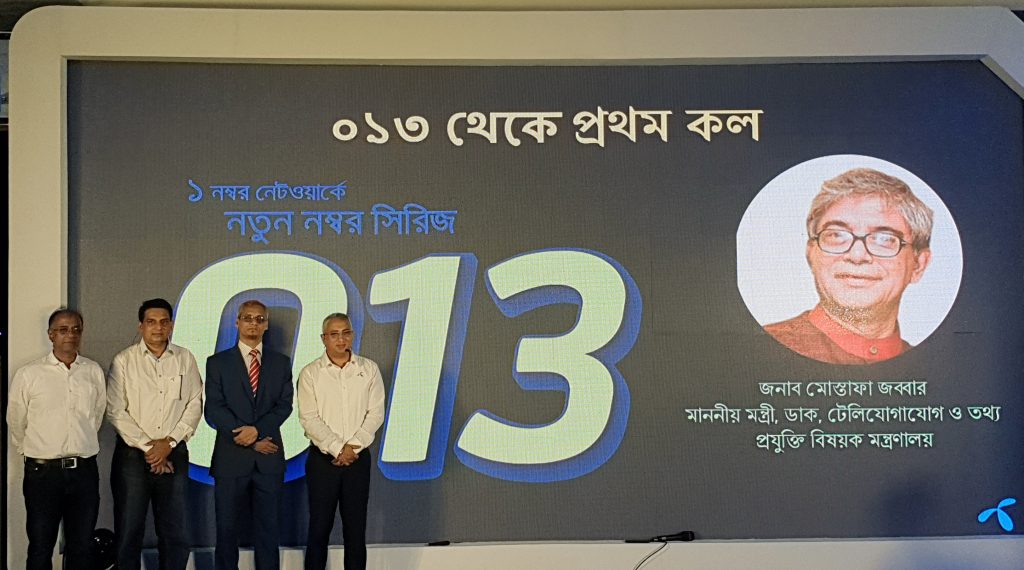 Grameenphone started its journey on March 26, 1997, with ‘017’ number series when Prime Minister Sheikh Hasina made the first call to Laily Begum, living in the rural outskirts of Dhaka city. Since then the company has been leading the telecom industry of the country and is currently serving 71 million customers, making it one of the top 20 mobile operators in the world in subscriber numbers.

In the last 21 years, the company has established the largest network of the country covering 99% of the population with high-speed mobile internet. Grameenphone always puts customers in the center and strives to offer services with unparalleled quality, which is why Ookla has declared Grameenphone network as the fastest mobile network in the country in 2018.

During its long journey, Grameenphone has always received the trust and loyalty from its customers leading to the high demand for ‘017’ number series and ultimately to the exhaustion of the ‘017’ number series. The lack of ‘017’ new numbers compelled the company to rely on recycled numbers to serve customers who want to enjoy the superior network and service of Grameenphone. Upon the request of the company, Bangladesh Telecommunication Regulatory Commission initially allocated 20 million numbers from ‘013’ series.

Thanking the regulator for allocating the new 013 series, Yasir Azman added that, ‘Grameenphone has always been the most preferred operator in Bangladesh for its superior network, innovative services, and competitive tariffs. Over the last 21 years under the 017 series, Grameenphone has been driving mobile penetration across the country, ushering in a new age of digitalization in Bangladesh. Our conviction remains the same with the 013 number series. I would also like to thank our 71 million customers for their trust on us and welcome those who will join our family under the new 013 series to discover our superior network and innovative services. GP is committed to unleashing the true benefit of digital Bangladesh by bringing the entire country under high-speed internet connectivity and we will roll it out faster than anyone before.’

With ‘013’ connections, customers will be able to enjoy the same portfolio of products and services, and the best network experience in the country that our customers using ‘017’ love. New SIM cards with ‘013’ numbers will be available at all SIM selling outlets, just like the “017” numbers and at the same price.