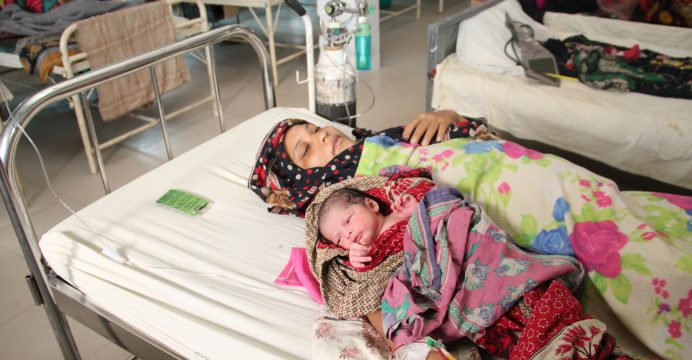 Bangladesh ranks 161st in the world for its investments in education and healthcare as measurements of its commitment to economic growth, according to the first-ever scientific study ranking countries for their levels of human capital.

The nation placed just behind Djibouti (ranked 160th) and just ahead of Togo (162nd). The United States ranked 27th, while India placed 158th.

“Our findings show the association between investments in education and health and improved human capital and GDP – which policymakers ignore at their own peril,” said Dr. Christopher Murray, Director of the Institute for Health Metrics and Evaluation (IHME) at the University of Washington.

However, the attainments of a few targets of MDGs are associated with several challenges also. According to the UNDP Bangladesh, the existence of poverty pockets, prevalence of unemployment and underemployment among the youth, stunting and wasting among the under-five children, reducing the dropout rate and enhancing the quality of education at the primary level, universal access to reproductive health and resource constraints are identified as stumbling blocks in fulfilling all the targets of MDGs in Bangladesh.

The World Bank President, Dr. Jim Yong Kim, defines human capital as “the sum total of a population’s health, skills, knowledge, experience, and habits.” It is a concept that recognizes that not all labor is equal, and the quality of workers can be improved by investing in them. 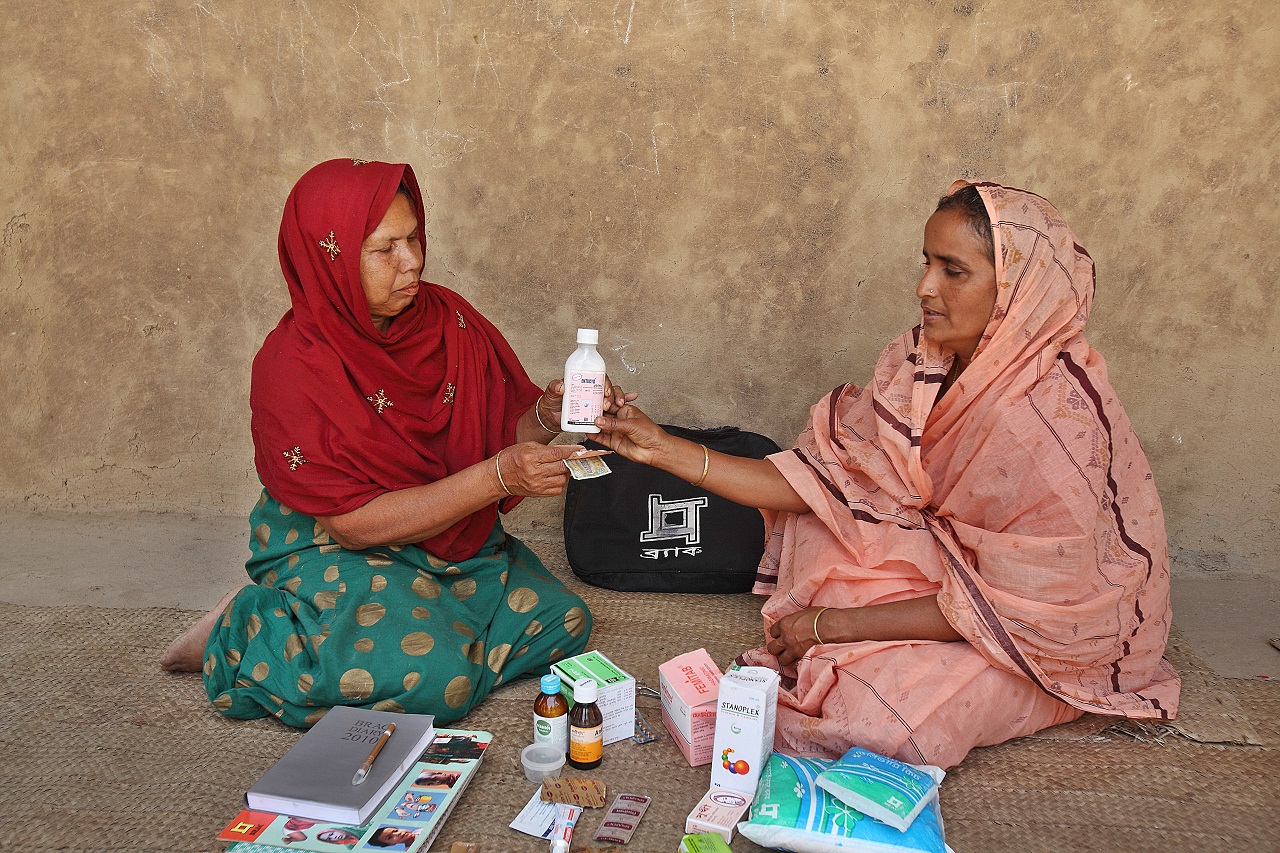 Mazeda Begum has been working as a health volunteer with BRAC Health Program. She is giving proper medicine to village local patient as a part of her daily door-to-door duty in Gazipur, Bangladesh.

Bangladesh’s ranking of 161st in 2016 represents an improvement from its 1990 ranking of 170th. It comes from having six years of expected human capital, measured as the number of years a person can be expected to work in the years of peak productivity, taking into account life expectancy, functional health, years of schooling, and learning.

Overall, Bangladesh residents had 41 out of a possible 45 years of life between the ages of 20 and 64; expected educational attainment of eight years out of a possible of 18 years in school; and a learning score of 69 and a functional health score of 48, both out of 100. Learning is based on average student scores on internationally comparable tests. Components measured in the functional health score include stunting, wasting, anemia, cognitive impairments, hearing and vision loss, and infectious diseases such as HIV/AIDS, malaria, and tuberculosis.

Kim has stated that measuring and ranking countries by their human capital will enable comparisons over time, thereby providing governments and investors insights into where critical investments are needed to improve health and education. Last year, he asked IHME to develop such a measurement.

“Measuring and ranking countries by their level of human capital is critical to focus governments’ attention on investing in their own people,” Kim said.

“This study from IHME is an important contribution to the measurement of human capital across countries and over time.” 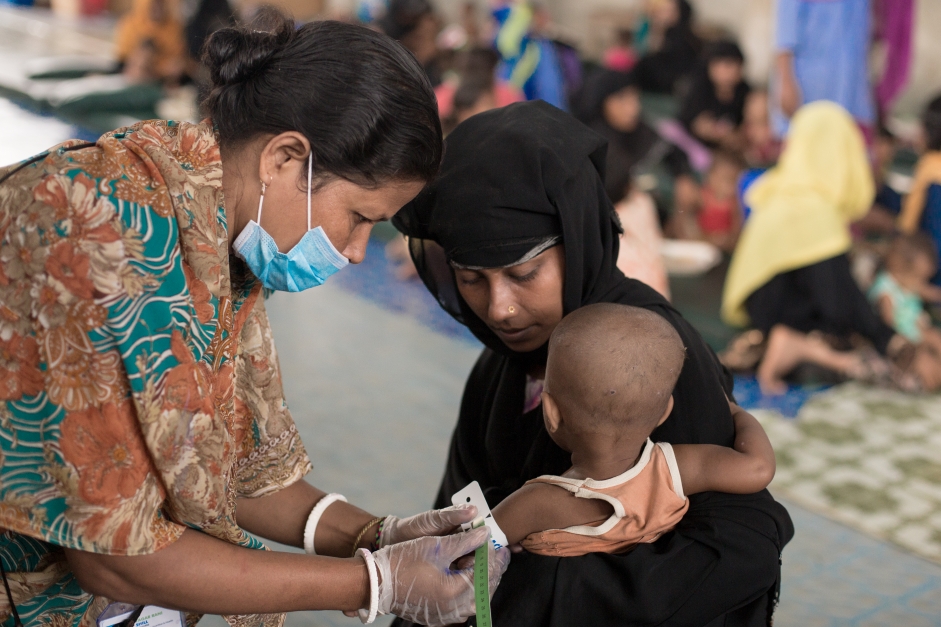 “Investing in people rather than primarily in infrastructure is the best way to achieve sustainable development, and investments in human capital through health and education offer compelling returns,” said Dr. Tedros Adhanom Ghebreyesus, WHO Director-General.

“This study is a valuable contribution to the evidence base we need to inform the debate.”

The study, “Measuring human capital: A systematic analysis of 195 countries and territories, 1990 to 2016,” was published in the international medical journal The Lancet. It is based on a systematic analysis of an extensive array of data from numerous sources, including government agencies, schools, and healthcare systems.

The study places Finland at the top. Turkey showed the most dramatic increase in human capital between 1990 and 2016; Asian countries with notable improvement include China, Thailand, Singapore, and Vietnam. Within Latin America, Brazil stands out for improvement. All these countries have had faster economic growth over this period than peer countries with lower levels of human capital improvement.

In addition, the greatest increase among sub-Saharan African countries was in Equatorial Guinea. Some of the world’s most rapid improvements were in the Middle East, including Saudi Arabia and Kuwait.

Over the past quarter century, there has been limited progress in building human capital in selected countries that started at a high baseline. The US was ranked sixth in human capital in 1990 but dropped to 27th in 2016 because of minimal progress, particularly in educational attainment, which declined from 13 years to 12.

Health and education advocates, economists, and others should use the findings as evidence to argue for greater attention to – and resources for – improving their nations’ human capital.

“Underinvesting in people may be driven by lack of policy attention to the levels of human capital,” Murray said.

“No regular, comparable reporting across all countries on human capital currently exists. Such reporting over the next generation – as a way to measure investments in health and education – will enable leaders to be held accountable to their constituents.”

The study focuses on the number of productive years an individual in each country can be expected to work between the ages of 20 to 64, taking into account years of schooling, learning in school and functional health. The calculation is based on systematic analysis of 2,522 surveys and censuses providing data on years of schooling; testing scores on language, math, and science; and health levels related to economic productivity.

Major differences in human capital investments are exemplified in the study’s comparison between Japan and Ethiopia.

Japan’s score of 24.1 years of human capital comes from having a life expectancy of 43.9 out of a possible 45 years between the ages of 20 and 64; expected educational attainment of 12.4 out of a possible 18 years in school; and a learning score of 94 and a functional health score of 85, both out of 100. Components measured in the functional health score include stunting, wasting, anemia, cognitive impairments, hearing and vision loss, and infectious diseases such as HIV/AIDS, malaria, and tuberculosis.

Ethiopia, however, despite significant progress, has a human capital score of only 4.7 years, composed of 38 expected years lived from age 20 to 64, educational attainment of 7.3, learning 62, and functional health 49.