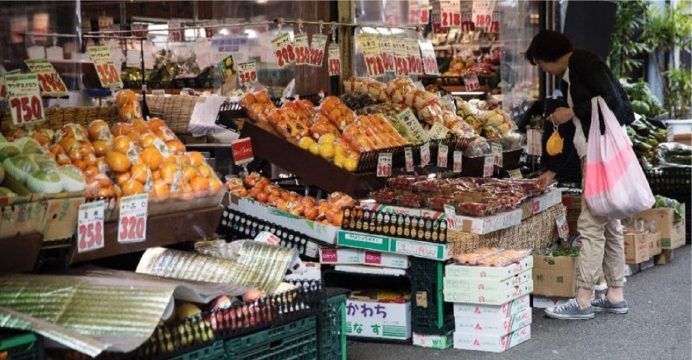 Prices in Japan edged up modestly in August

Prices in Japan edged up modestly in August, according to government data on Friday, as the world’s third-largest economy continues its years-long battle with deflation.

Inflation stood at 0.9 percent year-on-year in August, still far below the Bank of Japan’s two-percent target, even though slightly higher than 0.8 percent in July and June and 0.7 percent in May.

The latest figure was in line with market consensus. With fresh food and energy stripped out, prices rose by even less — just 0.4 percent year-on-year in August, the internal affairs ministry said.

Japan has battled deflation for many years and the central bank’s ultra-loose monetary policy appears to be having limited impact.

The Bank of Japan will not raise interest rates “for an extended period of time”, its chief said after the latest rate-setting meeting, even as US and European peers tighten monetary policy.

Deflation is bad for the economy partly because the expectation of falling prices discourages spending and dampens growth.

The latest data come a day after Prime Minister Shinzo Abe won comfortable re-election as leader of his ruling party, setting him on course to become Japan’s longest-serving premier.

During the election campaign for the vote, Abe said he wanted the economy to strengthen enough to allow the central bank to wind up the current super-loose monetary policy “by the end of” his new three-year term.

Analysts say Abe’s re-election means that the government will take active fiscal measures to boost the still-fragile economy along with the central bank.