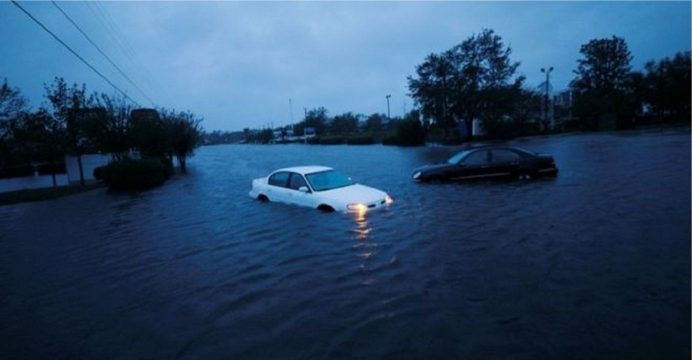 Why Wilmington, North Carolina cut off from the rest of the state following Hurricane Florence?

The coastal city of Wilmington, North Carolina, has been cut off from the rest of the state because of heavy floods following Hurricane Florence. Officials say all roads in and out are now impassable and have warned evacuated residents to stay away.

About 400 people have been rescued from floodwaters in the city, described as an island within the state. Two of the first known fatalities – a mother and her seven-month son – were reported in the city on Friday morning, reports BBC.

At least 15 other people are reported to have died in storm-related incidents across North and South Carolina since Florence made landfall on Thursday.

In Wilmington, with its population of about 120,000, some 400 people have had to be rescued from flood waters, and most of the city remains without power.

The National Weather Service has warned of at least two further days of possible flash flooding in the area before conditions are forecast to improve.

“Our roads are flooded, there is no access into Wilmington…We want you home, but you can’t come yet.”

The area is usually best known as a filming location for US dramas One Tree Hill and Dawson’s Creek. US basketball legend Michael Jordan – who is fundraising to help residents affected by the storm – also grew up in the city.

Many roads inside Wilmington are still passable for residents who defied evacuation orders to ride the storm out. But a city-wide curfew has been extended after five people were arrested on suspicion of looting from a store in the city on Saturday.

WHAT IS THE LATEST ON THE STORM?

Florence has now weakened into a tropical depression with winds of 30mph (45km/h), according to the National Hurricane Centre.

Some parts of the Carolinas have seen up to 40in (100cm) of rain since Thursday – and officials have warned river levels are yet to peak in places.

“The storm has never been more dangerous than it is right now,” North Carolina Governor Roy Cooper said on Sunday.

“Wherever you live in North Carolina, be alert for sudden flooding.”

As of Monday morning, there have been several tornado warnings across North Carolina.

One tornado touched down in Elm City, causing some damage to buildings and power lines, according to local media reports.

The governor also warned of the potential danger of landslides once the weather system reached more mountainous areas.

In South Carolina, the state’s emergency management division reminded residents: “It’s not over yet. Not by a long shot.”

The US coast guard and volunteer boats have been helping people left stricken by rising flood waters across the states.

Officials in North Carolina have said about 900 people have been rescued from floodwaters there, and about 15,000 people are still in emergency shelters.

US President Donald Trump has declared a disaster in several North Carolina counties – a move that frees up federal funding for recovery efforts.

He has praised federal and local law enforcement response to the storm on Twitter several times and the White House has indicated he may visit the affected area in coming days.

FEMA, First Responders and Law Enforcement are working really hard on hurricane Florence. As the storm begins to finally recede, they will kick into an even higher gear. Very Professional!

Power companies are working to restore power to the almost 502,000 homes and businesses in both states that are still without electricity.

The storm has begun to move into Virginia and West Virginia and is expected to turn toward New England on Tuesday.

WHAT DO WE KNOW OF THE VICTIMS?

A mother and her seven-month child who died when a tree fell on their house in Wilmington were the first known deaths reported.

Among the other fatalities were two men in their 70s who died in Lenoir County – one had been connecting extension cords and another was blown by high winds when checking on his dogs.

Four road deaths in South Carolina have been blamed on the storm, and two people died from carbon monoxide poisoning caused by a generator inside their home.