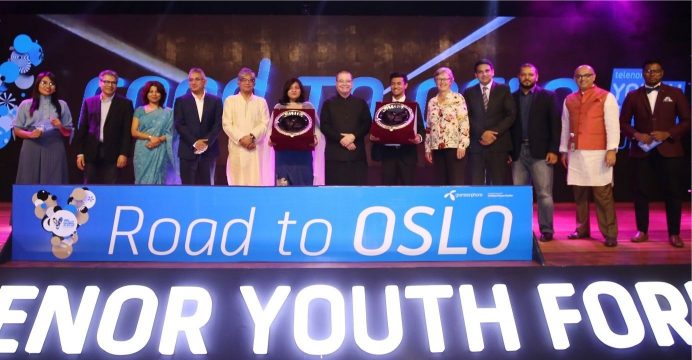 Out of the 8 finalists, Saima Mehedi Khan. and Samin Alam from IBA, Dhaka University, have won tickets to Oslo at the Grand Finale of Telenor Youth Forum, 2018 (TYF), held at GPHouse in Dhaka.

The winners of TYF 2018 will head off to Oslo, Norway, in December 2018 to join TYF delegates from seven other Telenor BU countries. Honorable Telecom and ICT Minister Mr. Mustafa Jabbar was present at the ceremony as Chief Guest.

Telenor Group, in partnership with the Nobel Peace Center, offers an opportunity for young people, aged from 18 to 28, from eight countries where Telenor has operations, to step up and present impactful ideas that can alter lives at the Telenor Youth Forum every year. This year’s theme for the grand event was ‘Bright Minds Reducing Inequalities’. The Bangladesh selection round for the sixth edition of TYF was organized by Grameenphone.

Over 1400 applications were screened to select 60 applicants who presented their idea on September 4 and September 5, 2018 at GP House to win the seven coveted spots in the TYF Grand Finale. The TYF Bangladesh finalists were: Tasneem Omar Ava, BRAC University; Sameen Alam, and Syed Sameen Shahrear, IBA Dhaka University; Tarek Musanna and Md. Nazib Intesar, BUP; Sabiha Saju Ibne Abedin, IBA, Jahangirnagar University and Iftekher Mahmud from Army IBA. Apart from the top 7, Saima Mehedi Khan of IBA, Dhaka University was chosen as a ‘wild entry’ and allowed to present her idea in the finale stage. The best participant from 8th to 20th places was considered for ‘Wild Entry’.

Each year two individuals are selected as winners and get the chance to represent Bangladesh at the TYF global event. This year’s winning ideas are ‘KrishiNet’ and ‘Project Shurakhha ’.

The top participants, who were selected through a stringent selection process, presented their final ideas to a jury of experts from Grameenphone and outside. The two winners were selected from 8 individuals who presented their best ideas to a judges’ panel. The winners will attend the TYF conference in Oslo, scheduled from December 9 to 11, 2018, during the Nobel Peace Prize ceremony. The TYF Grand Finale event was attended by university faculty members, local entrepreneurs from established startups, journalists, government officials, digital and social media experts, and students from different universities.

On this occasion, Mustafa Jabbar, Minister of Telecom and ICT said, ‘It is good to see that our youths are working with up and coming technologies to solve social problems. They are able to prove themselves at any stage of the world. I would like to thank Grameenphone and Telenor Group to provide them with such a global stage.

Michael Foley, CEO of Grameenphone, said, ‘Since the beginning of TYF, it has been one of the most inspiring days of the year for me. Over the years it has become a bona fide platform for the future leaders of the country to work with concepts that can change the world.’

Grameenphone launched TYF 2018 in July this year through a press conference. The company invited students and interested applicants to submit their ideas through various online submission channels like Telenor webpage, Grameenphone webpage, official Facebook page etc. This event was first launched in 2013 and has grown to be a significant event for youth leadership, innovation and social entrepreneurship.