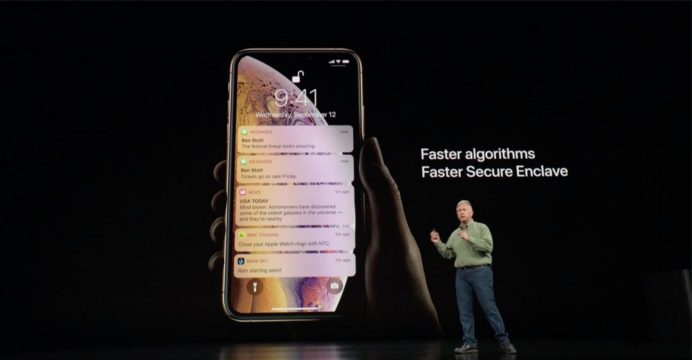 Apple has updated its iPhone X handset with three more powerful models, two of which are larger than before.

The iPhone XS Max has a 6.5in (16.5cm) display. The iPhone XS has the same 5.8in-sized component as the original. The iPhone XR’s screen is 6.1in but is of lower quality, reports BBC.

A new smartwatch was also launched with an added fall-detection function. There had been concerns that the relatively high £999 entry price of iPhone X would limit its appeal.

That helped propel Apple to become the world’s first company with a market capitalization above $1tn (£768bn).

However, China’s Huawei still managed to overtake it in terms of overall smartphone market share in the April-to-June quarter, putting Apple into third place.

“Huawei was able to overtake it because Apple is not playing in the mid and low ends of the market,” commented Francisco Jeronimo from IDC.

“But Apple is very well positioned in the premium segment, and we don’t expect that to change over the next 18 months.”

Apple has not, however, included a headphone dongle this time around, so owners of wired headphones will need to factor in an additional £9 charge to add one.

Apple highlighted that the iPhone XS Max’s display was significantly larger than the 5.5in display of the old iPhone 8 Plus despite the two handsets being similar in size.

“Even if the screen on the iPhone X last year was larger some people who were on the Plus models missed the feel of a larger device which is exactly what the Max is addressing,” said Carolina Milanesi, an analyst at the consultancy Creative Strategies.

The iPhone XR also has a bigger screen but uses LCD (liquid crystal display) rather than the OLED (organic light-emitting diode) technology found in the more expensive models. This will mean black appear less deep and its colors appear to have less contrast.

In addition, its chassis is made from aluminum rather than steel, which means it is likely to be less damage-resistant. However, unlike the more expensive models, it comes in six different colors.

Analysts suggest the wider range may help encourage iPhone owners who did not upgrade last year to do so this generation.

“Retention has become very high for both Android and iOS – switching is largely a thing of the past,” suggested analysts at UBS.

“Put simply, the replacement for iPhone is iPhone, the only question is when – and the when is driven in large part by form factor, namely the screen.”

The latest phones feature a fresh processor – the A12 Bionic. It is the firm’s first to feature seven-nanometre transistor technology, which should aid energy efficiency and computation speeds. Its inclusion means the iPhone XS will last about 30 minutes longer on a battery charge than the X, Apple suggested.

The firm also said that its Face ID system would now work faster than before and it demoed several apps, showing off its augmented reality prowess.

Huawei recently announced it had developed a rival 7nm mobile chip of its own. Despite rumors that at least one of the new iPhones would feature three rear cameras – like Huawei’s P20 Pro – Apple stuck with two 12 megapixel lenses for the XS and XS Max. The XR only has one rear camera.

However, Apple did unveil a new feature that will allow users to alter the depth-of-field of their photos after they have been taken – effectively changing the degree to which the background is blurred.

The XS and XS Max also introduce support for two mobile contracts – in most countries, this will be via a physical Sim card in addition to an electronic eSim, which can be activated via a QR code among other means.

The version sold to Chinese consumers, however, will require two physical Sim cards to achieve this.

Benefits to owners include:

“Apple will face some inevitable criticism that these products offer only small improvements on prior successes,” said Ben Wood from the consultancy CCS Insight.

“However, the fact that Apple has sold almost two billion iOS devices to date is a testament to the success of the iPhone recipe since 2007.”

Earlier at its California event, Apple unveiled a new smartwatch with a display that extends further towards its edges than earlier models.

The firm said the Watch Series 4’s usable screen was more than 30% larger despite the device itself having similar dimensions to its predecessor. This allows more information and shortcuts to be shown at once.

It can also display electrocardiogram heart waveforms for the first time. This works via new sensors in its back and crown to allow owners to check if their heart has an irregular rhythm.

In addition, the timepiece will automatically warn its user if it detects their heart is beating abnormally fast or slow during everyday use.

Apple said the app that provides these functions had been given “De Novo” clearance by the Food and Drug Administration – meaning that it is recognized as being an entirely new category of product that can legally be marketed in the US as being capable of providing health readings safely and efficiently.

However, the paperwork makes clear it should not be used as a replacement for traditional diagnostic equipment.

“It’s an arduous process that no other consumer wearable company has successfully navigated.”

A new fall-detection facility also debuts thanks to the introduction of “next-generation” gyroscope and accelerometer sensors, which Apple said sampled data eight times faster than before.

If the associated software believes the user has suffered a hard fall and remained immobile for a minute or more, it will send the emergency services an alert including the user’s location, as well as contacting chosen friends or family if set to do so.

Apple overtook Xiaomi and Fitbit to become the world’s bestselling wearable tech company in the second half of 2017 thanks to strong demand for the last generation of its smartwatch. It has held on to the top spot ever since, according to IDC.

“The reason it performed so well is that many network operators are only willing to focus on smartwatches with their own [built-in cellular] connectivity,” said Mr Jeronimo.

“That’s why they are shipping about as many watches as the whole Swiss watch-making industry.”

Apple also confirmed that the next version of its mobile operating system – iOS 12 – will be released for existing devices on 17 September.