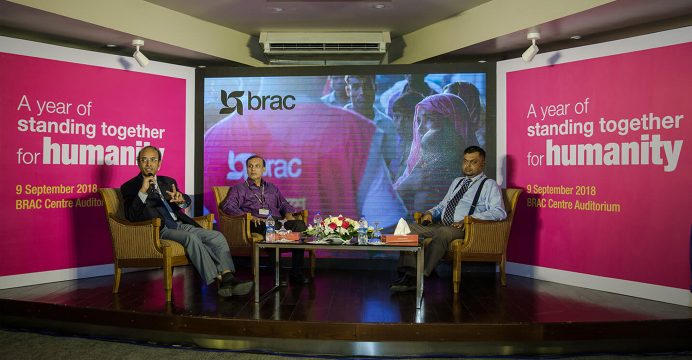 Ongoing international dialogues and actions to support the forcibly displaced Myanmar nationals sheltered in Bangladesh need to be stronger to ensure a safe and meaningful future for the more than 500,000 children from this community. The call was raised at a program organised by BRAC, one of the leading on-ground responders, at BRAC Centre Auditorium in Dhaka this morning, marking one-year since the influx began. BRAC senior officials shared experiences and learnings with journalists from the last 12 months of humanitarian interventions.

At the event, BRAC also announced the launching of an international communication campaign titled #SpaceOnEarth, to help strengthen global support for the Rohingya, especially the children. The campaign was developed in partnership with Ogilvy and Texel Foundation.

Women and children typically bear the biggest brunt of any disaster. Children are often left with no option but to shoulder the same responsibilities as parents. In the #SpaceOnEarth video, Rohingya children describe in their own words the atrocities they faced. They ask: in a world as big as ours there must surely be a safe place they can call home.

BRAC Executive Director Dr Muhammad Musa said children are behaving like adults. They have seen so much atrocity in their short lives that they have forgotten to cry, as if their childhood is lost. “We cannot let that happen and the world needs to step in to support the effort to ensure a meaningful future for these children.”

The event began with Dr Akramul Islam, director of BRAC’s Humanitarian Crisis Management Programme, giving an overview of the organisation’s activities for the Rohingya community in the last year. He stressed BRAC’s involvement with both the Rohingya and the host communities.

BRAC, as one of the very first responders to the crisis, provided emergency services in the first phase, and then expanded into comprehensive, coordinated services in areas such as healthcare, education, skills development and agriculture, as a partner to the government. Until now, more than 45,000 children have been registered in BRAC’s child friendly spaces. BRAC’s healthcare centres provided consultation to over 1.1 million people and nearly 150,000 people are now living in shelters built by BRAC. In addition, BRAC has also been serving people from the host communities from Teknaf and Ukhiya with education, life skills, livelihood and emergency support.