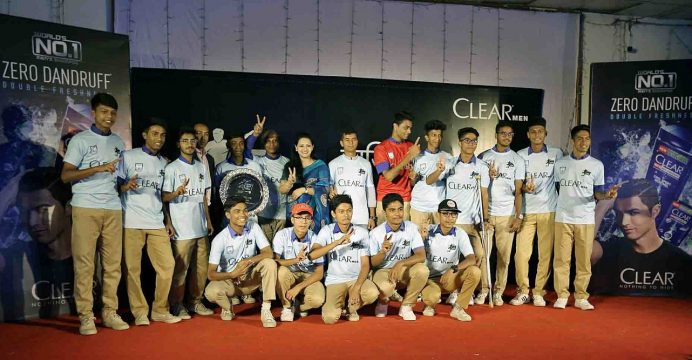 In addition to Bangladesh Football Federation and Unilever Bangladesh high officials, teachers, guardians, and students of BAF Shaheen School were also present in the program.

“Clear Men is committed to encouraging school-based Football. That is why Clear Men has organized such a big event like under-17 Football tournament,” said Nadia Tabassum.

Other speakers stressed the need for arranging such school-based football tournament for creating pipelines for national team players and ameliorating the country’s football performance. They congratulated Clear Men for organizing a football tournament to such a big extent.

Earlier, Clear Men, the world’s number one men’s shampoo brand, in association with Bangladesh Football Federation organized the biggest football tournament in the country’s history that continued from March to May.

As many as 272 school football teams across the country participated in the tournament. On May 12, Sonadighi High School of Rajshahi’s Godagari clinched the title by defeating B A F Shaheen School at Birshreshtha Shaheed Mostafa Kamal Stadium in Kamalapur.

The best 26 players have also been picked up for the national football camp. In continuation of the first year’s success, Clear Men in association with Bangladesh Football Federation will keep organizing the tournament in the years to come. The reception was followed by a cultural program.