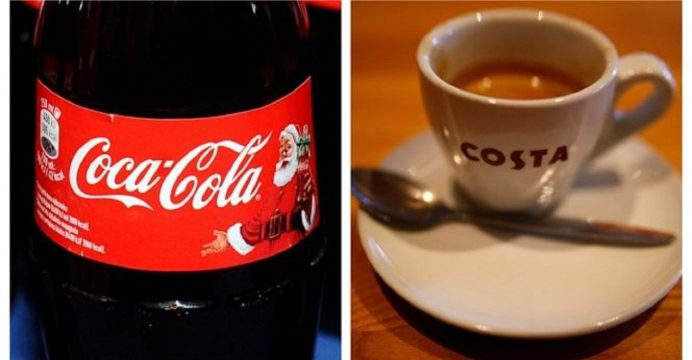 Coca-Cola to buy the Costa coffee chain from Whitbread in a deal worth £3.9bn

Coca-Cola is to buy the Costa coffee chain from owner Whitbread in a deal worth £3.9bn. Whitbread had intended to spin off the chain as a separate firm, but said a straight sale was more profitable.

Chief executive Alison Brittain said Whitbread would now focus on its Premier Inn business in the UK and Germany. Whitbread bought Costa, which is now the UK’s biggest coffee chain, for just £19m in 1995.

Whitbread shares were up 16% in Friday afternoon trading.

Speaking on reporters, Ms Brittain explained that Coca-Cola wanted to buy Costa because “they want the coffee product, they have no coffee in their range”.

She said the money from the sale would be used to expand the Premier Inn chain, return some cash to shareholders, pay down debt and boost the pension fund.

Describing the sale as a “win-win” for everyone, she said the price paid by Coca-Cola was far higher than if Costa had been demerged into a stand-alone company on the stock market.

She said she thought the beverage giant would use Costa to create “ready to drink, cold brew coffees”.

“You could see Costa absolutely everywhere, in vending machines, hotels, restaurants, pubs, cafes – in all the places you see Coke today,” she added.

Coca-Cola chief executive James Quincey told investors on a conference call that Costa was “a winning company that can go global”.

He acknowledged that retail sales were a new area for Coca-Cola, but said Costa already had “a strong management team” and that Coca-Cola intended to “make it attractive for them to stay”.

Whitbread announced earlier this year that it was planning to spin off Costa. Whitbread had been under pressure to consider a break-up of the business after hedge fund Elliott Advisors became the company’s largest shareholder.

Elliott reportedly put forward a demerger plan after building up a 6% stake in the firm. As well as being the largest UK coffee chain, Costa is also the world’s second largest. It is looking to triple its presence in China, where it is second to Starbucks.

According to consumer analysts Kantar Worldpanel, the out-of-home coffee market is worth £6.3bn a year in the UK alone.