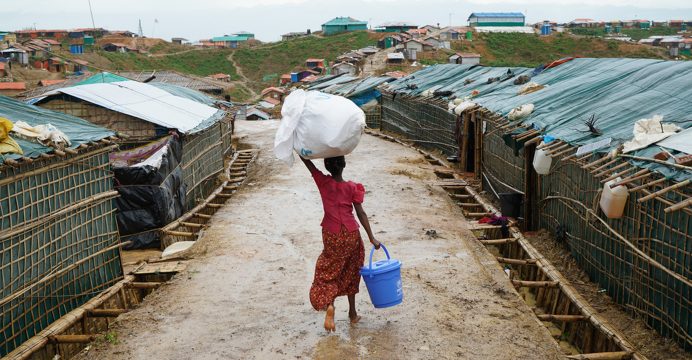 One year on, Rohingya refugees live in dire camps, facing an uncertain future and legal limbo

One year since over 700,000 Rohingya refugees were forced to flee from Myanmar into Bangladesh, the denial of their legal status, coupled with unacceptable living conditions in haphazard makeshift camps, continues to trap refugees in a cycle of suffering and poor health.

On 25 August 2017, the Myanmar Army launched renewed ‘clearance operations’ against the Rohingya people causing widespread violence and destruction, and forcing more than 706,000 to flee into neighbouring Bangladesh. They joined over 200,000 others that had fled to Bangladesh after previous waves of violence, bringing the total number of Rohingya hosted in Cox’s Bazar district to over 919,000. In the 12 months since, MSF has provided over 656,200 consultations, equivalent to more than two-thirds of Rohingya refugees, in 19 health facilities or mobile clinics. 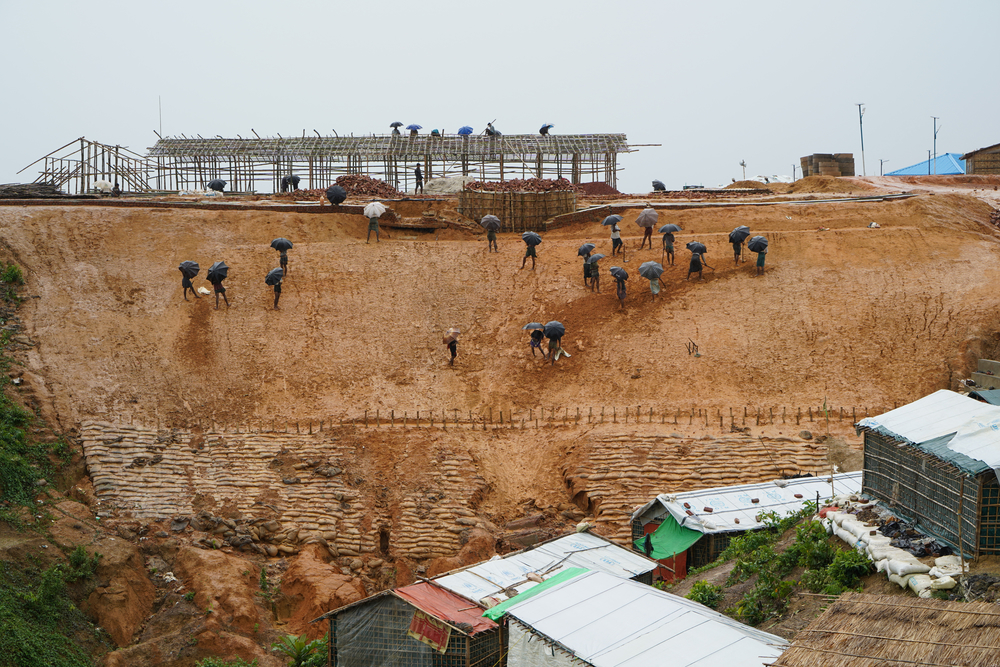 Daily workers stand on a hill they are trying to fortify against collapsing under the heavy rains. Many Rohingya shelters, made of flimsy plastic sheeting and bamboo, have already collapsed or been washed away as a result of heavy rains. One year on since the biggest ever influx of Rohingya refugees to Bangladesh, people are still living in the precarious basic shelters as when they first arrived, which makes them vulnerable to the elements.

At first, more than half of MSF’s patients were treated for violence-related injuries, but other health concerns soon emerged that were linked to the overcrowded and unhygienic conditions in the camps.

“It is unacceptable that watery diarrhoea remains one of the biggest health issues we see in the camps,” says Pavlo Kolovos, MSF head of mission in Bangladesh. “The infrastructure to meet even the most basic needs of the population is still not in place, and that seriously affects people’s wellbeing.”

While Bangladesh showed extraordinary generosity by opening its doors to the refugees, 12 months on, the Rohingya’s fate remains very uncertain. Host states in the region deny them any formal legal status, despite the fact that they are refugees and have been made stateless by Myanmar. 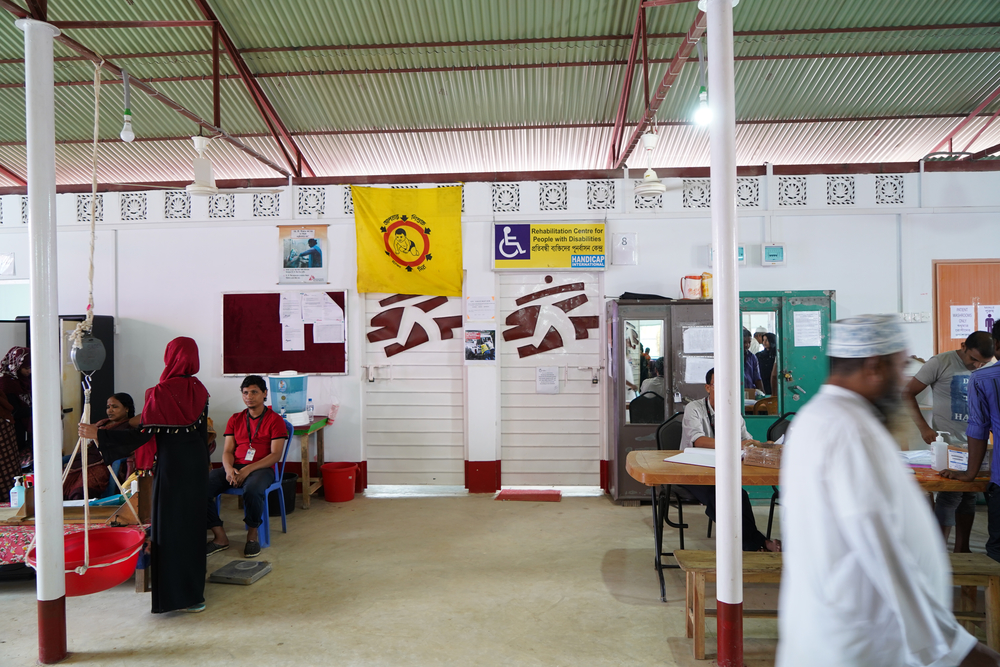 “We are in a situation where it is difficult to even refer to Rohingya refugees as exactly that,” says Kolovos. “By refusing to acknowledge the legal rights of Rohingya as refugees, or granting them any other legal status, intervening governments and organisations keep them in a state of acute vulnerability.”

Donors and governments with influence over the Government of Myanmar have failed to show the necessary leadership by not pressuring it to end persecution against the Rohingya, which is the cause of their displacement.

In addition, the UN-led humanitarian response in Bangladesh is, to date, only 31.7 percent funded. Within that, health care funding stands at a mere 16.9%, leaving significant gaps in the provision of vital medical services. The Rohingya have long been excluded from healthcare in Myanmar, meaning they have very low immunization coverage. Preventative health measures are therefore crucial. Vaccination campaigns, supported by MSF, have been instrumental in preventing outbreaks of cholera and measles, and in containing the spread of diphtheria. 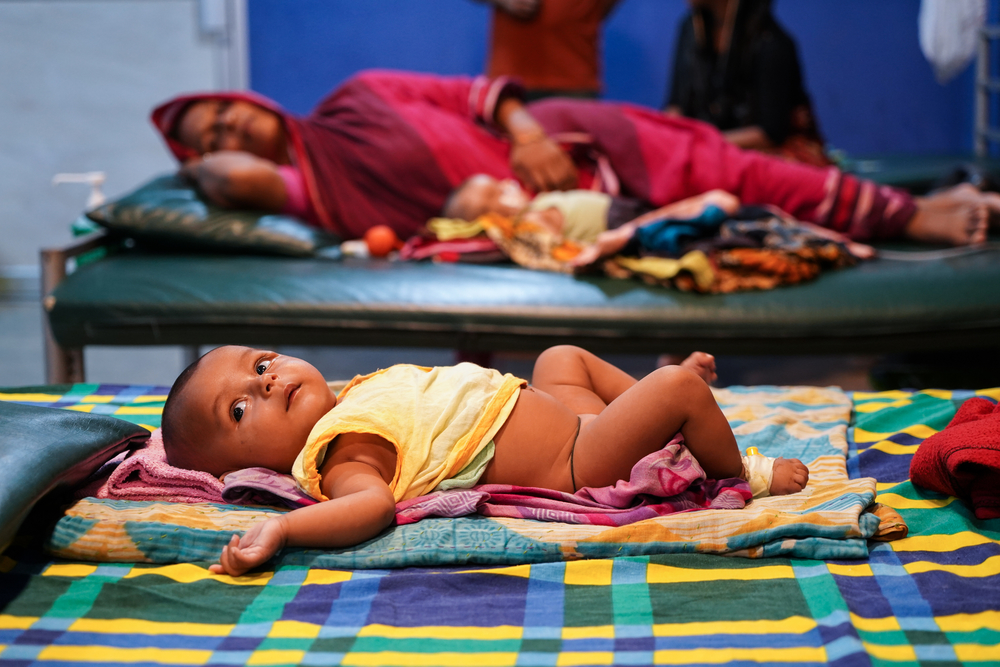 A baby lies on a bed at the pediatric ward at Kutupalong medical facility.

Under the pretext that the Rohingya will soon be returning to Myanmar, the humanitarian response has been hampered by restrictions placed on the provision of long term or substantial aid. The conditions endured by the Rohingya in the haphazard, makeshift camps fall far short of accepted international humanitarian standards, with the refugees still living in the same temporary plastic and bamboo shelters that were built when they first arrived.

“In an area where cyclones and monsoons are common, there are almost no stable structures for Rohingya refugees, which has a tangible impact on their security and dignity,” says Kolovos.

One refugee that MSF spoke to described how vulnerable his family felt in the camp: “When it rains we sit together, all our family members, [holding the house down] so the house won’t blow away. At night it is very dark here, we have no lights.” 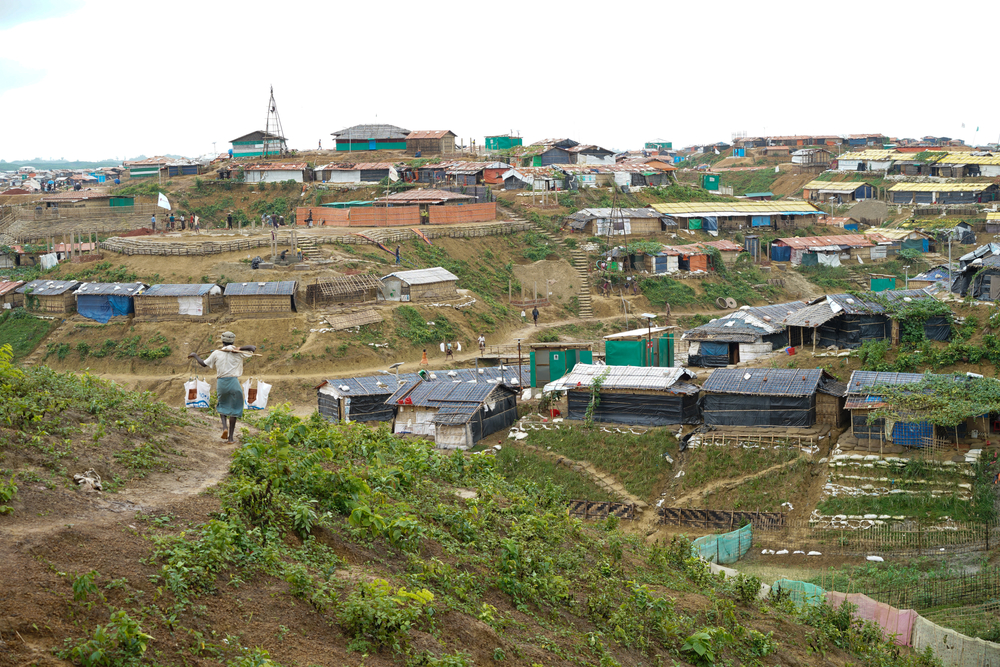 A Rohingya refugee carries bricks through Balukhali camp. The bricks will likely be used to fortify infrastructure, such as roads or walkways, against the heavy monsoon rains that are battering the camps and its inhabitants

Considering the level of violence that the Rohingya faced in Myanmar and the trauma this will have caused, services to treat mental health issues and sexual and gender-based violence injuries remain inadequate. They are also complicated by the lack of legal status, which prevents people from reasonable access to justice and the rule of law. In addition, the Rohingya remain forcibly confined to the camps, and most of the refugee population in the camps have poor access to clean water, latrines, education, job opportunities and healthcare.

“These restrictions not only limit the quality and scale of aid, but also force the Rohingya to depend entirely on humanitarian aid. It deprives them of any chance to build a dignified future for themselves and makes every day an unnecessary struggle for survival,” says Kolovos.

Many of the refugees that MSF teams speak to are very anxious about the future.

“I’ve lost my strength, my ability to work. I always have so many worries, worries about the future,” says Abu Ahmad, a Rohingya father of eight. “I think about food, clothes, peace and our suffering… If I stay in this place for 10 years … or even for one month, I will have to suffer this pain.”

More durable solutions must be found to respond to what is likely to be a protracted period of displacement. “The reality is that hundreds of thousands of Rohingya have been displaced in Bangladesh and elsewhere for decades, and it may be decades until they can safely return to Myanmar, if ever. The scale and scope of the Rohingya’s suffering merits a much more robust response – locally, regionally and globally,” says Kolovos. “Pressure must meanwhile continue to be exerted on the Government of Myanmar to halt its campaign against the Rohingya.”