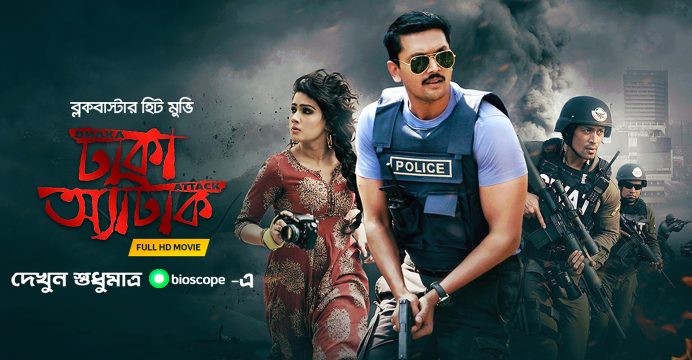 ‘Dhaka Attack’ Released on 6th October 2017 and opened in over 100 theaters in Bangladesh and was later released worldwide. ‘Dhaka Attack’ also received massive response overseas when it hit theatres across US, UK, Canada, Australia, Malaysia and the Middle East and emerged as a super-duper box office hit. And now the Dhaka Attack team is giving people a chance to watch it online on Bioscope.

Based on the bravery of the Bangladesh Police Force, the film’s unique style of storytelling and non-stop enthralling action kept the audiences at the edge of their seats made ‘Dhaka Attack’ stand out from all other Bangladeshi films.

The Director Dipankar Dipan said, ‘I am very much grateful to our viewers. ‘Dhaka Attack’ has seen a massive success for their love and support. We have released the film on Bioscope so that our viewers can enjoy the film from home. Now, anyone can stream online and watch ‘Dhaka Attack’ on 1080p Full HD.’

The movie had a star-studded casting of Arifin Shuvo, Mahiya Mahi, Alamgir, Afzal Hossain, Laila Hasan, Taskeen Rahman, Nawshaba and others. As the main antagonist, newcomer Taskin Rahman was the show-stopper. Arifin Shuvo in the lead role received huge appreciation for this role.

Based on Terrorism and contemporary issues, the film showcased great acting and cinematography. ‘Dhaka Attack’ broke many records for Bangladeshi cinema history. This movie can be viewed through Bioscope, anywhere and anytime across the world. Viewers can stream this film through Bioscope’s app or on the website – www.bioscopelive.com .