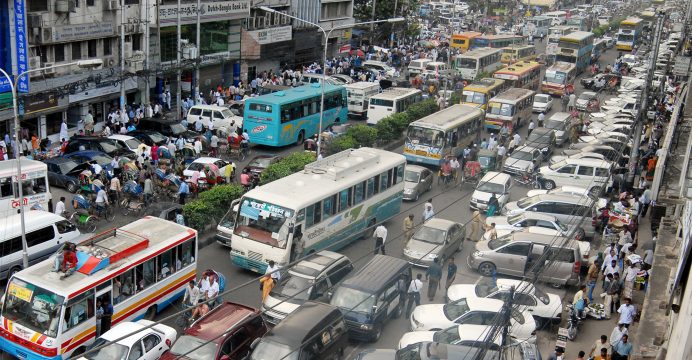 The Prime Minister’s Office (PMO) has issued a set of directives asking the authorities concerned to take up different measures including keeping doors of the running buses always closed and stopping getting in and down of passengers without stoppage to ensure road safety in the capital, reports BSS.

The directives came from a meeting of the Governance Innovation Unit (GIU) of the PMO on “Development of Traffic System in Dhaka City” held at the PMO on Thursday.

The directives were given about transport management, road management, fitness and license of vehicles and dissemination of government steps through mass media.

Among the directives, the government asked the authorities concerned to take up measures to keep doors of all public transports always closed while moving and stop getting in and down of passengers without stoppage.

The directives also included showing names of driver and helper with pictures, driving license and mobile numbers at two noticeable places at vehicles by August 20 next, keeping up all activities of Traffic Week until next directive and introducing remote-controlled automatic electric signaling system in Dhaka city.

The decisions also include making mandatory the wearing of helmets by the motorcycle riders and riding highest two persons on a motorbike as well as compelling them to abide by all traffic rules including signals.

Directives were also given to fasten seat belts by the drivers of passenger vehicles, especially long-distance buses, side by side with making arrangements for introducing seat belts in the vehicles for the passengers. Legal steps will be taken against those who will breach the law.

Besides, the meeting took a decision to take effective steps to completely stop crossing of roads by the pedestrians in all roads of the capitals within hundred meters of the foot-over bridges or underpasses. If possible, those citizens who are respectable to the law can be conferred upon ‘thanks’ or ‘laudable’ words.

Apart from these, directives have also been issued to make visible the zebra crossings and road signs in all the roads of the capital, freeing the footpaths from the hawkers side by side with freeing the roads from illegal parking and illegal structures.

The name plates of all the roads will have to be installed in a visible place. The meeting also decided to take effective steps to introduce automatic electric signaling system side by side with preventing the movement over the road dividers through raising the height of all road dividers in the capital.

The meeting on improving the traffic system in Dhaka city also took a decision to deploy mobile courts, ensure presence of the members of law enforcement agencies and check the fitness of vehicles and driving licenses on random sampling basis in at least two places to and from Mohakhali flyover to Farmgate.

Besides, initiatives will have to be taken to make arrangements for crossing of roads by the students with the help of the senior students, scouts, and BNCC just before and after the academic activities in coordination with all educational institutions in the capital.

The Ministry of Education will give necessary directives in this regard.

Regarding the fitness and license of vehicles, the meeting decided to take steps against illegal transports, and in case of providing fitness certificates to the vehicles, the concerned authorities will have to take fruitful steps after inspecting the vehicles, scrutinizing the possibility of speedily “crash” the route-permit less/unfit vehicles.

The authorities will have to expedite the process for distributing licenses and in this case, driving test can be taken before providing the ‘learner’ license while the successfully passed out candidates can be provided with licenses with the shortest possible time.