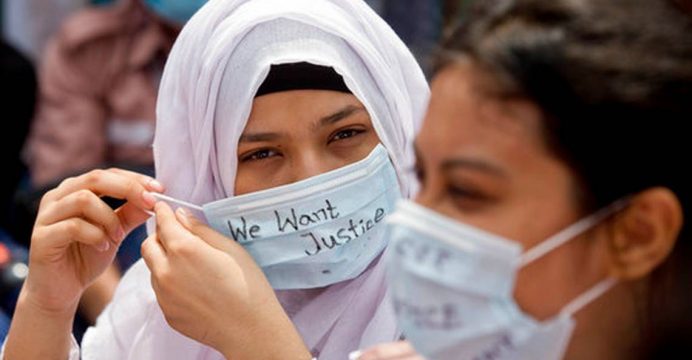 Bangladesh’s cabinet on Monday will consider capital punishment for traffic accident deaths, a law ministry official said, as tens of thousands of students protested for a ninth day over the deaths of two teenagers killed by a speeding bus in Dhaka, reports Reuters.

Prime Minister Sheikh Hasina, who faces an election due by the end of the year, has accused her political rivals of trying to stir up anti-government sentiment using the deaths as a pretext. The opposition has denied involvement.

The crowded capital of 18 million has been paralyzed by angry school and college students demanding changes to transport laws following the July 29 deaths, after a privately-operated bus ran over a group of students.

“In this amendment it has been proposed to award the highest level of punishment if it is killing by an accident,” said the law ministry official, who has been briefed on the matter but declined to be identified ahead of a decision.

Handing down the death penalty for accidents is rare anywhere in the world, and Bangladesh transport officials listed measures ranging from 14 years in Britain in extreme cases to two years in India.

Three years in jail is the current maximum in Bangladesh.

Defying government warnings to end the protests, students in school uniforms have blocked most of Dhaka’s roads, setting up checkpoints that let through only emergency vehicles.

Police said they were still investigating Sunday’s attack on a car carrying the U.S. ambassador to Bangladesh by a group of armed men, some riding motorcycles. There were no injuries but two vehicles were damaged.

The U.S. embassy said it was not in a position to comment until the investigation was complete. Ambassador Marcia Bernicat was returning from dinner at the time of the attack.

Earlier the embassy had criticized the police crackdown on the protesters, whom it described as having “united and captured the imagination of the whole country”.

Police had fired tear gas to break up the protests on Sunday and last week beat up some students in a bid to get them to disperse.

Police detained social activist and photographer Shahidul Alam who had posted comments that a student wing of Hasina’s ruling party was trying to attack the protesters.