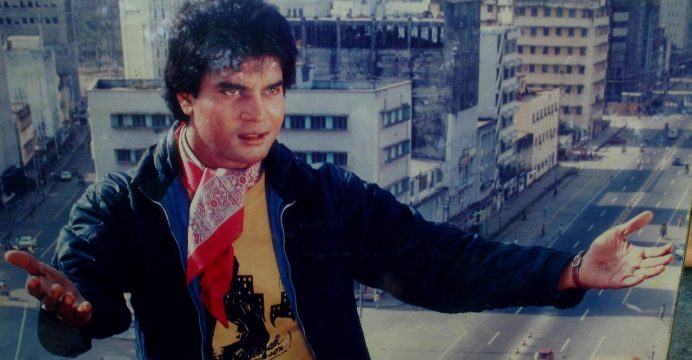 Veteran actor Ilias Kanchan, along with his organization Nirapad Sharak Chai, formed a human chain in front of the National Press Club in Dhaka on Friday around 11am.

The human chain was formed to support the ongoing protests for safe roads, and justice for the two students killed in a road accident on Airport Road recently. The actor was scheduled to leave for London, but postponed his plans when the protests began. He felt his long-desired dream of a complete system overhaul of Bangladesh’s road-transport system, is finally close to becoming a reality.

Ilias Kanchan’s wife, Jahanara Kanchan, was killed in a road accident in 1993. Since that incident, Ilias Kanchan has been a road-safety activist and started the non-profit organization Nirapad Sharak Chai. Currently the organization has 120 branches around the country.

In his speech before forming the human chain, Kanchan said: “Since I started this movement, I have faced a lot of harassment. Now, 25 years later, Bangladeshi students have come out on the streets realizing that if they do not protest, they might lose their lives because of these unsafe roads.

“If the government had implemented the suggestions we made 25 years ago, these incidents could have been avoided. We asked the government to allocate a budget to set up training institutions for drivers, but this has not been done—even in this year’s budget. I ask protesters to refrain from vandalizing vehicles so that vested parties cannot take control of the movement. The demands of the students need to be implemented from Sunday. If this does not happen then I, myself, will take to the streets with the students.”

The announcement about the human chain event was posted on Nirapad Sharak Chai’s Facebook page. People started gathering from 10am to take part in the demonstration. Many other NGOs were also present including, Swift Solutions, Humanity Revolution Bangladesh, and Shondip Friends Circle Association.