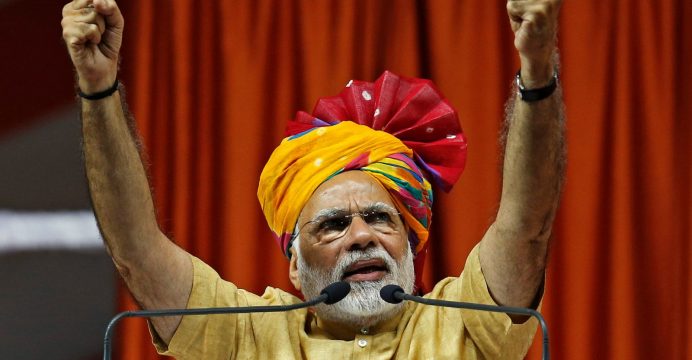 One of Indian Prime Minister Narendra Modi’s biggest critics is rallying opposition parties against his government after a new list of citizens excluded 4 million people from a border state in a drive against illegal immigrants.

The draft National Register of Citizens (NRC) is the result of a years-long agitation by residents of the northeastern state of Assam demanding expulsion of the immigrants from Muslim-majority Bangladesh just over the border.

Work on it accelerated under the state and federal governments of Modi’s Hindu nationalist Bharatiya Janata Party (BJP), and the exclusions from the list released on Monday have given ammunition to opposition parties to band together against Modi’s re-election bid next year.

“This can’t be tolerated and that’s why India needs a change, and the change must come in 2019, for the betterment of the people of this country,” Banerjee said at an event in New Delhi.

Outside parliament, her regional All-India Trinamool Congress led a protest by lawmakers from seven political parties, who held placards demanding “Stop this divide and rule policy” and “Why have Indian citizens become refugees in their own country?”

Assam has been racked by waves of violence over the years as residents, including tribal groups, have clashed with both Hindu and Muslim settlers, whom they accuse of plundering resources and taking away jobs.

BJP President Amit Shah hit back at the opposition, saying his party was the only one that dared to take a firm stance against illegal immigration. He said migrants from Bangladesh had no place in India.

India does not have a deportation pact with Bangladesh, however, and the government has said it would decide on the fate of those eventually deemed foreigners in consultation with the Supreme Court, which is monitoring the registration process.

In Assam, many applicants queued for the second day at government booths to check their citizenship status, with some relieved at finding their names on the list while others who did not make it hung around, dejected.

There have been no reports of violence and security remains tight.

A final list is expected in December, but rights activists fear it might strip citizenship from many, especially Muslims who have lived in the region for decades.

“Indian authorities need to move swiftly to ensure the rights of Muslims and other vulnerable communities in Assam are protected from statelessness,” she said in a statement.

William Spindler, a spokesman for the United Nations High Commissioner for Refugees (UNHCR), said the agency was concerned about the registration process and monitoring it closely.

The UNHCR also appealed to the Indian government not to deport those who fail to qualify for citizenship, even after claims and appeals are exhausted.

Bangladesh has not had any communication from New Delhi on the issue, said Jyotirmay Dutta, a senior official of its interior ministry.