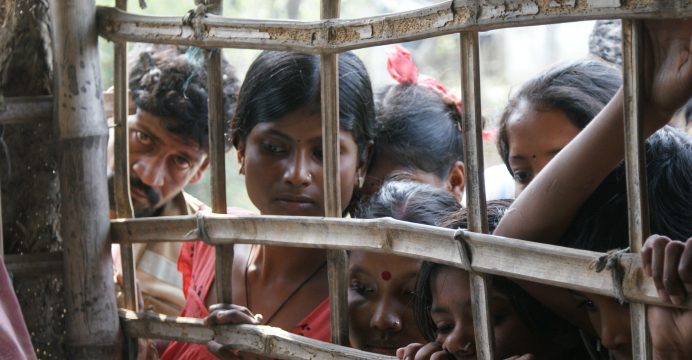 50,000 girls trafficked to India every year

As much as 50,000 Bangladeshi girls are trafficked to or through India every year, a roundtable on human trafficking was told on Sunday citing statistics of India’s Border Security Force aka BSF.

Citing statistics of the police headquarters, the dialogue was also informed that some 4,152 cases have been recorded between February 2012 and June 2018 under the Prevention and Suppression of Human Trafficking Act in 2012.

The cases involve 5,367 men, 1,638 women and 835 children victims of human trafficking at home and abroad but only 25 human traffickers were convicted during the time.

BRAC’s Migration Programme organised the roundtable on combating human trafficking and irregular migration on the eve of the World Day against Trafficking in Persons at BRAC Centre Inn in the capital.

Taking part in the discussion, the National Human Rights Commission (NHRC) chairman Kazi Reazul Hoque said despite the existence of a relevant law, human trafficking still continues as there are gaps in handling the issue.

“We have to identify the root cause of human trafficking and address those,” he said.

The root cause of trafficking has to be identified for the prevention of human trafficking, he added.

Glorgi Gigauri said the human trafficking will be reduced if the livelihood opportunities are created.

Several trafficking victims described their bitter experiences of trafficking at the roundtable.

In the dialogue Ilias, one of the trafficking victims, described how he was trafficked to Iran in 2011.

He said he was allured by the middlemen to go abroad in the name of ensuring lucrative jobs there.

“I could not realise anything as I was given the travel documents just two hours before the flight. I was sold for several times and I was beaten up for paying money to the middlemen. I had to languish in jail several months as well,” he lamented.

Ilias said he returned home with the help of IOM on 28 October 2012.

BRAC’s Asif Saleh said a comprehensive approach has to be taken to deal with the human trafficking and irregular migration issues.

He said BRAC will work to make the recruiting agencies functional and to create a regional platform to prevent human trafficking.