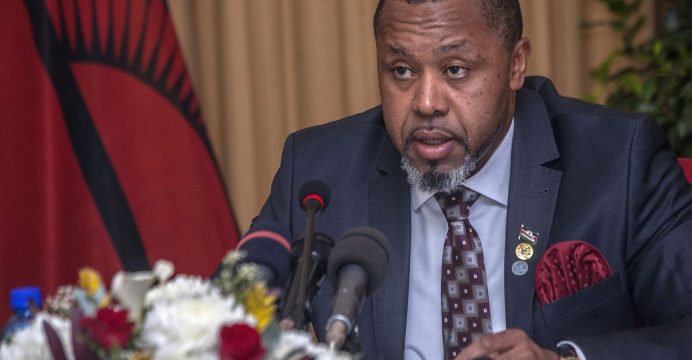 Malawian Vice President Saulos Chilima, who has quit the ruling party and plans to run for president, says his administration would investigate alleged corruption among officials of the current government and anyone at fault “will not be spared”.

The impoverished southern African nation has been rocked by corruption scandals over the last decade, and the issue has resurfaced in the run up to national elections next year.

Chilima, who quit the ruling Democratic Progressive Party (DPP) last week in protest at alleged corruption, is seen as the biggest threat to President Peter Mutharika in 2019 polls for president, parliament and ward councillors.

“Anyone found to have corruptly amassed wealth will not spared,” Chilima told Reuters in an interview.

“If we get into power next May, I will give each person in the former administration who cannot explain his wealth 30 days in which to return the money, and then investigate them.”

Chilima, who had been a member of the DPP politburo, has formed a new organization, the United Transformation Party, on a promise of clean governance.

Earlier in July Malawi’s main opposition party called for Mutharika’s resignation over allegations that he received a kickback from a $4 million government contract.

Mutharika, president since 2014, denied the allegations, calling them part of a smear campaign designed to take votes away from the DPP.

“I have been vice president for the last four years. I’ve had no support within to fight corruption, so the best way is to run for the highest office and then take corruption head-on,” Chilima said.

His anti-corruption comments have earned him some grassroots support, but also the wrath of the establishment.

On Thursday, Mutharika’s office withdrew his security clearance, saying he would only retain the privilege when performing government duties.

“There comes a time in everyone’s life when one has to bid farewell to personal comfort for the benefit of his or her compatriots,” Chilima said.

While Mutharika is expected to win reelection, persistent allegations of corruption, along with periodic food shortages, power outages, and ballooning external debt have hurt his popularity and opened the door for contenders.

“Chilima could well be the dark horse who wins the election and here is why: people are increasingly disturbed by the shameless thieving of the current government,” said Lilongwe-based political analyst Onjezani Kenani.

Government spokesman Nicoluas Dausi, who is also information minister, questioned how much Chilima had done to fight corruption in his current position.

“This is the country’s second most powerful man and we expected him to fight corruption. What did he do about it? Why now? He is still part of the same government he now labels corrupt,” Dausi said.