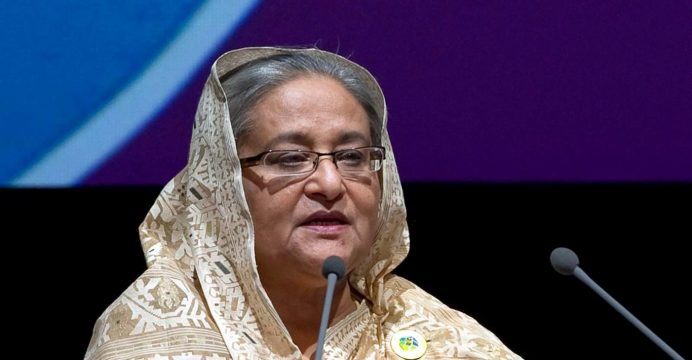 Hasina also asked them to communicate with her directly if they face any hindrance to their work.

“Maintain peace in industrial zones and eliminate extortion, muscle-flexing and terrorism,” said the prime minister while opening a three-day conference of deputy commissioners in Dhaka on Tuesday.

“I emphasise that you must tackle these problems without hesitation.”

“It’s not necessary to see who is associated with which party. I’m the head of the government, but I’m also a daughter of the Father of the Nation at the same time. If anybody obstructs your work, you can easily contact me or my office,” she said.

“We want to ensure peace and security for the people by removing those evil forces from the society.”

The prime minister has also issued 22 instructions for deputy commissioners to follow.

Hasina urged the officials to perform their duties sincerely so that common people never face any harassment to access government services. Also, they should work hard to curb extremism, terrorism and religious discrimination to maintain peace and harmony, she said.

They have to work to reduce the poverty level by developing rural infrastructure and small and medium industries and by creating more job opportunities, she said.

They should give importance to local products, processed food and agricultural products to create more industries.

Information and communication technology should be developed. They should work together with grassroots representatives to ensure good governance at local level.

Different measures must be taken to include school dropouts into the mainstream, she said.

Transparency and skill development is necessary in land administration and management while they should be vigilant in protecting government land. Every inch of land should become productive in some sense.