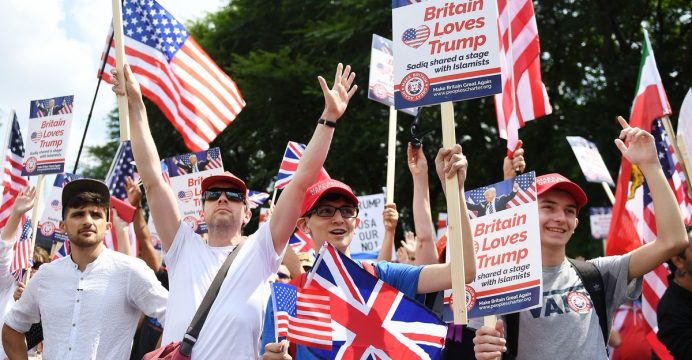 Trump supporters turn out in London a day after protests

Thousands of Trump supporters and right-wing activists took to the nation’s capital on Saturday — a day after anti-Trump protesters had dominated the city.

While the displays of right-wing support were nowhere near as large as the enormous anti-Trump march that demanded the international media’s attention the day before, it was still a significant show of support for Trump from those eager to counter the claim that Trump had been unanimously rejected by Britons.

Later, approximately 3,000 people turned out near Trafalgar Square to show their backing of Trump as well as jailed right-wing and anti-Islam activist Tommy Robinson.

Robinson, the ex-leader of the English Defense League, was jailed for 13 months beginning earlier in May for contempt of court after being arrested filming outside a court in Leeds. His supporters have claimed that the law was applied unevenly and have expressed concern for his safety in prison, considering his history of criticizing Islam.

A number of right-wing groups were present at the march, including Generation Identity — which calls itself a “European patriotic youth movement” — as well as a number of right-wing Western politicians. Controversial Dutch MP Geert Wilders made an address by video, while Rep. Paul Gosar, R-Ariz., spoke about the importance of free speech.

The speeches were a blend of support for Trump, Robinson and also concerns about the danger of mass migration and the importance of national sovereignty.

“The rubbish that was spouted about Trump yesterday, it’s complete unjustified vitriol against him,” Robert Stevens, wearing a Trump T-shirt, told Fox News. “I’m not a massive Trump fan but the geezer in my opinion has done nothing wrong.”

He also rejected the idea that the majority of people at the protests were “far-right.”

“I don’t think we’re right wing, we certainly ain’t left but we just want what’s right and I think Tommy Robinson represents everything what’s right about just working class people speaking up to all the wrongs and that,” he said.

The event came to a close by a video of Trump reading the lyrics to “The Snake” — often used by Trump as an allegory for Islamic immigration.

As police negotiated with those demonstrators, others yelled at them to get out of the road — nervous as increasing numbers of photographers took pictures of those blocking the path of a bus, which was being driven by a woman in a hijab.

“We ain’t gonna get nowhere with you lot,” one man blocking traffic yelled at other protesters stood on the sidewalk. The man would later tell Fox News that he wanted to hold traffic up to “cost the British government some money — because that’s all they understand.”

“You’re a f——g idiot,” a fellow marcher yelled back at him, urging the police to “drag him out” of the road. The Evening Standard later reported that there had been 12 arrests after clashes broke out in Westminster.

Robinson supporters were likely to be buoyed by a Reuters report that said that Sam Brownback, the U.S. ambassador for International Religious Freedom, complained to the British ambassador in Washington D.C. about Robinson’s treatment.

A State Department official told Fox News that the characterizations of the meeting were “completely false.”

Across the other side of London, a pub in Hammersmith had renamed itself “The Trump Arms” for the presidential visit and was scheduled to hold an event Saturday evening featuring hot dogs, cocktails and other American treats.

Decorated with copious amounts of American flags, MAGA caps and a life-size cutout of President Trump, patrons told Fox News they had come out of their way to show support for Trump.

Mark Nicholas said he objected to the way Trump had been treated when he visited London.

“If the Queen was treated in America the same way, we’d be up in arms,” he said. I think whether you like him or don’t like him, he should be treated accordingly.”

Landlord (currently going by the title of “chief of staff”) Damien Smyth, said that it was London Mayor Sadiq Khan’s approval of the “Trump baby” balloon that made him take the leap into changing the name of the establishment.