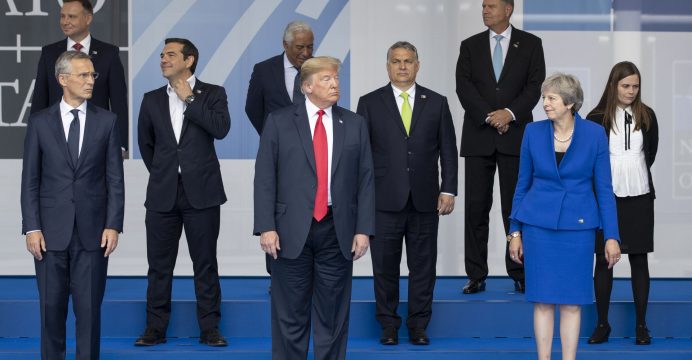 Trump’s portrayal of NATO in crisis carries risks for alliance

Donald Trump’s portrayal of NATO as an alliance in crisis has raised concern that the U.S. president’s nagging criticism might erode U.S. public support and risk America’s commitment to collective defense, diplomats said.

Allies emerged confused and shaken from a two-day NATO summit in which Trump harangued them over perceived under- spending on defense, accused Germany of being a prisoner to Russian energy and prompted an emergency meeting of leaders trying to contain the fallout from the unexpected tirade at one session.

NATO diplomats complained that the drama around Trump’s forthright comments had overshadowed big decisions that the allies took in areas from defense spending to new weapons and strategies to address Russia’s efforts to destabilize the West through cyber and covert attacks.

“There was a gap between the Trumpian-generated idea that there is some kind of crisis and the reality that this was one of the most substantial summits for years,” one senior NATO diplomatic source told Reuters.

Having questioned the value of NATO in tweets throughout the summit, Trump later told reporters that the 29-member military alliance “was not doing what they were supposed to be doing” until he came to Brussels and that he was “extremely unhappy” until his intervention.

Then he claimed “total credit” for increases in defense spending, although they were in fact agreed in 2014, and warned that “NATO is helping Europe more than it is helping us,” in language that did not make a public case for unity.

However, the summit also agreed on a new training mission for Iraq, an invitation for Balkan state Macedonia to join NATO and more funding for troops in Afghanistan.

While Trump did let the 79-point summit declaration go through, his assertion that “I’ve taken over a lot of bad hands and I am fixing them,” at the end of the summit left the impression there were serious problems at NATO, diplomats said.

NATO may now need its friends in the U.S. Congress and in the Republican and Democratic parties to speak out more to prevent permanent damage to alliance’s image in the United States, they said.

The U.S. Senate overwhelmingly approved a motion in support of NATO on the eve of this week’s summit, and former U.S. Secretary of State John Kerry called for more.

“Enough,” the Democrat said of Trump’s style at the summit. “This isn’t good for the United States and there are people across the aisle – as the Senate vote yesterday clearly showed – who know it and need to say it,” Kerry said on Twitter.