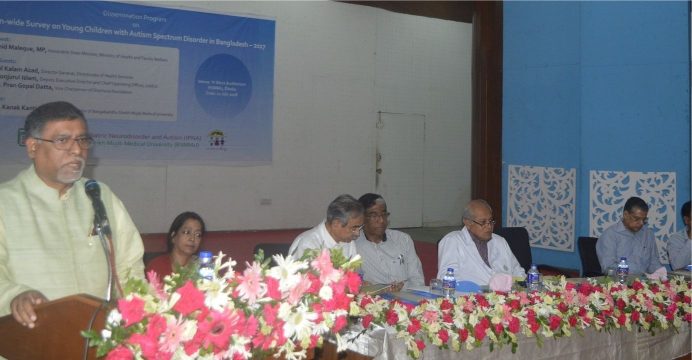 The prevalence rate of autism in children between 16 and 30 months of age is 17 in every ten thousand in Bangladesh.

This is the final outcome of the largest survey conducted by the Institute of Pediatric Neuro-disorder and Autism (IPNA), the first and only institute of Bangabandhu Sheikh Mujib Medical University (BSMMU).

The title of the survey is ‘Nation-wide Survey on Young Children with Autism Spectrum Disorder in Bangladesh 2017′. In order to disseminate the findings of this survey, IP A organized a dissemination program today at’A’ Block auditorium of BSMMU.

Honorable State Minister for Health and family welfare, Mr. Zahid Maleque, MP, was present as the chief guest in the dis pr which was presided over by Prof. Dr. Kanak Kanti Barua, Vice Chancellor of BSMMU.

The survey was conducted in two phases by randomly selected 85 areas of 30 districts of 8 divisions across the country from May to November 2017 duration of time. The number of total surveyed children was 38,440 aged between 16 to 30 months.

During door to door visit at sample areas, the data collector used ‘Red Flag’ followed by ‘M-Chat’ as primary screening tools and then finally ‘DSM-5’ was used for autism diagnosis.

The findings show that the ASD prevalence is 17 per ten thousand children. Among them, rural prevalence is 14110000 whereas urban is 25110000. The number of affected boys is two and a half times higher than the female child revealed by the survey.

Speaking on the occasion, Mr. Zahid Maleque said that Honorable Prime Minister and Jononetri Sheikh Hasina’s government is sincere towards the children with disabilities.

The government has passed two acts specifically for the protection of chlldren and their families, who are suffering from disabilities, autism and other neurological problems.

Based on the prevalence rate obtained through this survey, Mr. Maleque hopes that it will be possible to undertake sound policies and specific programs in the future for the children with autism and their families.

In his speech, VC Prof. Dr. Kanak Kanti Barua expressed his gratitude to the Prime Minister and his daughter, Saima Hossain Wazed, and said that IPNA, as well as Bangabandhu Sheikh Mujib Medical University, will always be ready to give the proper services for the children with autism and other neurodevelopmental disorders.

It is noted that since its inception, IPNA has been conducting higher research and training programs in addition to providing necessary services and advice related to autism and other neurodevelopmental problems.