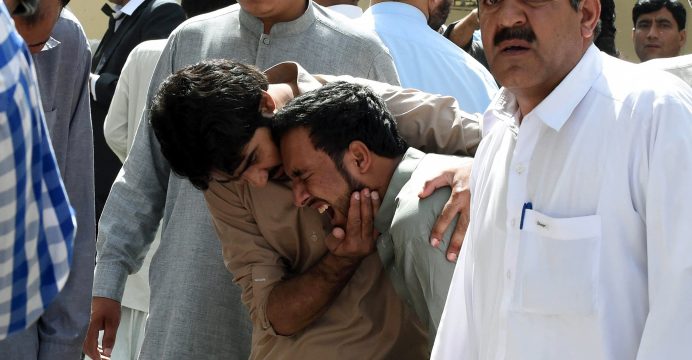 A suicide bomber killed 70 people at an election rally in southwestern Pakistan in the second election-related attack on Friday, officials said, amid growing tensions over ousted prime minister Nawaz Sharif’s return ahead of the July 25 vote.

The bombing was the most deadly attack in Pakistan in over a year and is the third incident of election-related violence this week.

It came as Pakistan’s caretaker government launched a crackdown on political gatherings with Sharif, who was ousted by the Supreme Court last year and convicted in absentia of corruption a week ago, flying back to rally his party ahead of the general elections.

Baluchistan caretaker Health Minister Faiz Kakar told Reuters that the death toll in the attack had risen to 70 people, with over 120 wounded.

Senior police official Qaim Lashari had earlier said that more than 1000 people were in attendance at the rally in the town of Mastung in the violence-plagued province of Baluchistan.

Among those killed was Baluchistan provincial assembly candidate Siraj Raisani, whose brother Nawab Aslam Raisani had served as the provincial chief minister from 2008 to 2013.

“My brother Siraj Raisani has been martyred,” said Haji Lashkari Raisani, another brother who is also contesting a national assembly seat from Baluchistan.

Raisani is the second electoral candidate to be killed in pre-election violence this week.

Police had earlier said that the attack targeted Raisani’s convoy but later changed their statement as video footage of a large tent showing damage from the blast was circulated.

Earlier in the day, a bomb blast killed four people in the northern town of Bannu when it struck the campaign convoy of Akram Khan Durrani, an ally of Sharif’s party from the religious Muttahida Majlis-e-Amal party (MMA).

A suicide bomber blew himself up at a rally by an anti-Taliban political party in the northern city of Peshawar on Tuesday, the capital of Khyber Pakhtunkhwa province killing 20 people including Haroon Bilour who was hoping to win a provincial assembly seat in July.

The Pakistani Taliban claimed responsibility for the attack.

Bilour was part of the predominantly secular, ethnic Pashtun nationalist Awami National Party, which has long competed with Islamist parties for votes in Pakistan’s volatile Pashtun lands, along the border with Afghanistan.

His father, senior ANP leader Bashir Bilour, was killed in a suicide bombing in late 2012, in the run-up to Pakistan’s last election.

Islamist militants linked to the Taliban, al Qaeda and Islamic State have been operating in the province, which borders Iran as well as Afghanistan. It also has an indigenous ethnic Baluch insurgency fighting the central government.