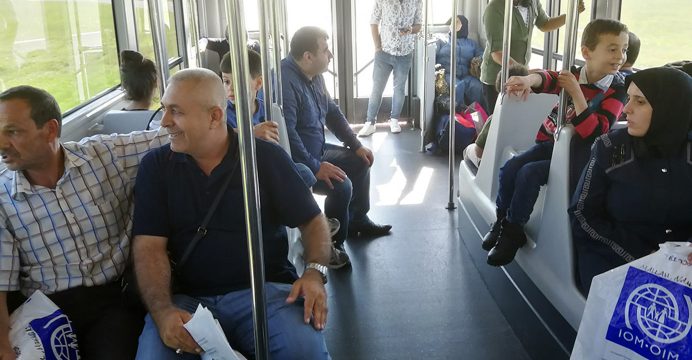 A third group of 24 Syrian refugees landed in Zagreb after leaving Turkey today (10/07) with the support of IOM, the UN Migration Agency, in a continuation of the first ever resettlement programme initiated last year by the Republic of Croatia.

The new arrivals included five families, 13 adults and 11 children, of which there were 15 males and 9 females. Four persons have been assisted with special travel and transport arrangements based on their specific needs, including wheelchairs and care for a pregnant passenger.

After leaving the airport, the new arrivals were taken to the Reception Centre for Asylum Seekers in Kutina.

To date, three groups totalling 105 refugees have resettled to Croatia from the 150 planned through the pilot programme.

A total of three selection missions to interview potential beneficiaries under the programme have been carried out in Turkey so far.

As was done with the two groups of Syrian refugees who were resettled earlier this year, IOM staff will provide Croatian language and Socio-Economic Orientation courses on topics such as living and working in Croatia, building social networks, getting familiarized with the institutions and organizations, and rights and obligations in education, housing, health, social welfare and employment.

Since the start of the programme, a total of 69 beneficiaries above 6 years of age have participated in an 80-hour beginner Croatian language course organized by IOM, and 62 resettled persons took part in an 18-hour Socio-Economic Orientation. IOM also conducted skills and education assessments for 57 individuals.