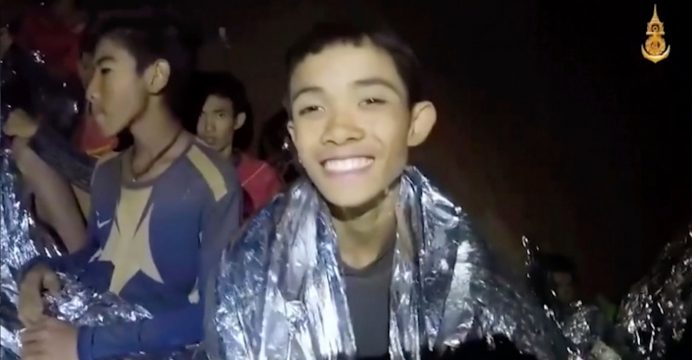 Nineteen divers have entered the Tham Luang cave in northern Thailand on a gruelling, hazardous mission to rescue those people still trapped inside.

They extracted a ninth boy on Tuesday, the Thai Navy said, with reports suggesting two more.

If confirmed, one child and an adult remain to be rescued, bringing to a close an epic operation marred by one diver’s death.

Eight boys rescued earlier are said to be in good mental and physical health.

Interesting that the Thai PM is allowed to visit the children but not the parents. Health is clearly not the reason parents cannot see their children. #Thamluangcave

The group, a football team, had got stuck deep inside on 23 June after heavy rains caused flooding.

After they were found by divers last week, huddled in darkness on a ledge and cut off from the outside world for nine days, the race began to get them out before the weather deteriorated even further.

The boys evacuated so far have undergone X-rays and blood tests. They will remain under observation in hospital for at least seven days.

A doctor and Thai Navy Seal divers have been looking after those still on the ledge, about 4km (2.5 miles) from the cave’s mouth.

Rain was falling but rescuers say the water level inside the cave is similar to that on Sunday, the first day of the operation, an official said.

Thai Navy SEALs confirmed a ninth child had been brought out at 16:06.

Helicopter and ambulance activity in the cave area, from which the media have been barred, suggests that at least two more members of the Wild Boars football team were rescued and were being ferried to hospital.

After the boys had spent so long in the cold and dark with poor ventilation and relatively little to eat and drink, there were concerns that they would be in a far worse state. Now that they are dry, warm and in safe care, full medical assessments can be done.

None of the first eight has a fever – a sign of a possible infection – although two have needed antibiotic treatment for suspected lung infections. Doctors will be checking for any infections, such as “caver’s disease”, a lung disease caused by a fungus that grows in bat droppings. They will also make sure any cuts and scrapes that the boys have on their skin are clean and healing nicely.

The boys remain in quarantine, meaning their parents will not be allowed any physical contact. This is partly to protect the boys from unnecessary infections until they regain their strength, as well as to prevent them passing on anything they might have picked up in the wet cave.

They will need to build up their muscles and their immunity, as well as get used to living in the outside world again. For now, they wear shades to protect their eyes from the bright light.

How are the rescued boys?

The first group of four boys was rescued on Sunday, followed by four more on Monday.

Some of the boys had low temperatures, with one showing a low heart rate when they were first taken to hospital, but they have now recovered.

“All eight are in good health, no fever… everyone is in a good mental state,” Jesada Chokedamrongsuk, permanent secretary of the public health ministry, said at a news conference.

Health officials say they were at first given instant food and energy gels but are now eating easy-to-digest food.

They also say some of the boys have now seen their parents – but only through glass.

Further test results are expected in a few days and if all signs of infection have cleared, families will be allowed to visit. However, they must don protective clothing and cannot go closer than 2m (6ft).

However, Thailand’s Prime Minister, Prayuth Chan-ocha, has been allowed to visit the boys.

They have been guiding the boys through darkness and submerged passageways towards the mouth of the Tham Luang cave system.

Getting to and from where the boys are has been an exhausting round trip, even for the experienced divers.

The process includes a mixture of walking, wading, climbing and diving along guide ropes already in place.

Wearing a full-face mask, which are easier for novice divers than traditional respirators, each boy is being accompanied by two divers, who also carry his air supply.

The toughest part is about halfway out at a section named “T-Junction”, which is so tight the divers have to take off their air tanks to get through.

Beyond that a cavern – called Chamber 3 – has been turned into a forward base for the divers.

There the boys can rest before making the last, easier walk out to the entrance. They are then taken to hospital in Chiang Rai.

In an indication of how dangerous the journey can be, a former Thai navy diver died in the caves on Friday. Saman Gunan was returning from a mission to provide the group with air tanks when he ran out of oxygen.

The rescue mission chief said the second day of the operation had gone more smoothly than the first, taking two hours less as the procedure became more refined.

A massive pumping operation is said to have helped lower the water level inside the cave system, making the journey in and out easier than it was.

Aged between about 11 and 17 became trapped during an excursion with their coach.

Some details have emerged of members of the team and their coach.

Captain Duganpet Promtep, 13, is described as a motivator and highly respected by his teammates. He had apparently been scouted by several Thai professional clubs.

Myanmar-born Adul Sam-on, 14, speaks several languages, and was the only team member to be able to communicate with British divers when they were first discovered.

It was 17-year-old Peerapat Sompiangjai’s birthday when the group became trapped in the cave. The snacks the boys brought with them to celebrate are likely to have helped them survive their ordeal.

Assistant coach Ekapol Chantawong, 25, was said to be the weakest of the group when they were found, as he had reportedly refused to eat any of the food and gave it instead to the boys.