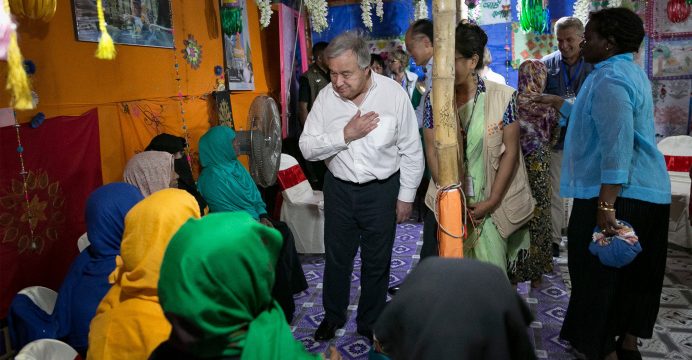 Describing their visit to camps as “heartbreaking”, Mr Guterres afterwards told a gathering of UN staff that the humanitarian response was “extraordinary. I have never seen anything quite like this and it makes me proud to be [with the] UN and to be your colleague,” he said.

During the visit Mr Guterres and Mr Kim saw first-hand the massive amount of work undertaken by the Site Maintenance Engineering Project (SMEP). Through the multi-agency initiative, IOM, WFP and UNHCR are creating safer ground for the relocation of thousands of refugees threatened by landslides and floods and are pre-positioning teams and machinery to keep critical access routes open during the worst monsoon conditions.

During a press conference, Mr Guterres appealed to the international community to “step up to the plate and to substantially increase financial support” to all those in Bangladesh working to support and protect the Rohingya refugee community. 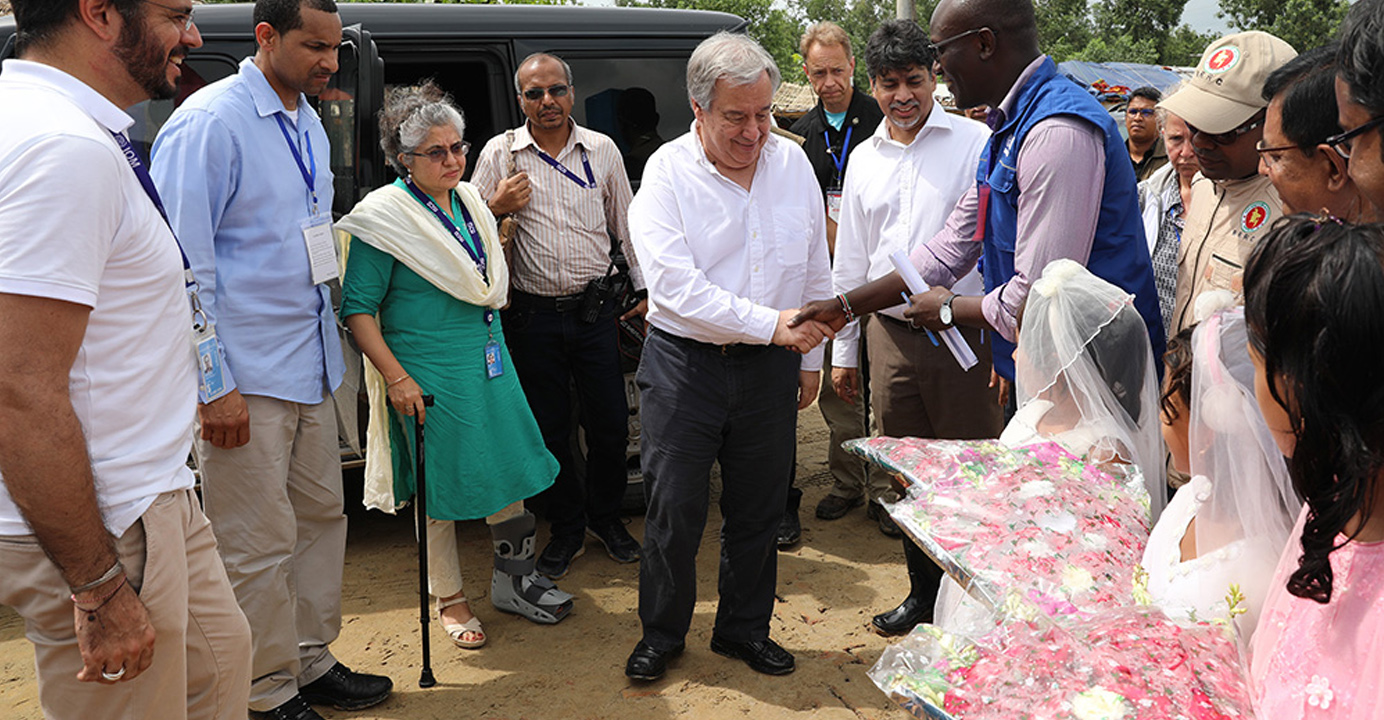 Speaking with Manuel Pereira, IOM’s Emergency Coordinator, as they crossed a bamboo bridge built under the SMEP, Mr Kim highlighted how the World Bank considers projects to help improve the quality of life for the refugees and local communities affected by the crisis as a priority.

Afterwards Mr Pereira said: “IOM and our partners are working flat out to improve conditions in the camps and support hundreds of thousands of refugees, as well as people in local communities affected by the crisis. I would urge the international community to respond to the calls (of Mr Guterres and Mr Kim) to provide the financial backing we need to continue working to help this extremely vulnerable population, who are in such desperate need of ongoing, life-saving support.”

Bangladesh Foreign Minister Abul Hassan Mahmood Ali and head of the Refugee Relief and Repatriation Commission (RRRC) Mohammad Abul Kalam, who met the UN delegation at the SMEP site, also stressed the need for ongoing international support for the response.

The World Bank has announced that it will provide the Government of Bangladesh with USD 480 million to support Rohingya refugees and local communities in Cox’ Bazar affected by the crisis.

After visiting the SMEP site and hearing from refugees about their daily challenges, the delegation, which also included UNFPA Executive Director Natalia Kamen, visited a UNFPA women’s centre, where they heard from refugees who had experienced sexual and other violence in Myanmar.

IOM and UNFPA are among the key organisations providing on-going support to Rohingya women and girls affected by sexual and gender-based violence. Mr Guterres later highlighted the immense need for support of victims of sexual violence, torture, and those suffering from trauma and mental health issues.

The delegation then visited IOM’s flagship “D4” medical facility at the heart of the Kutapalong-Balukhali mega camp, where staff have carried out over 55,500 consultations for refugees and members of the local community since it was established in March 2017. This is which is one of 12 clinics managed by IOM in the camp. 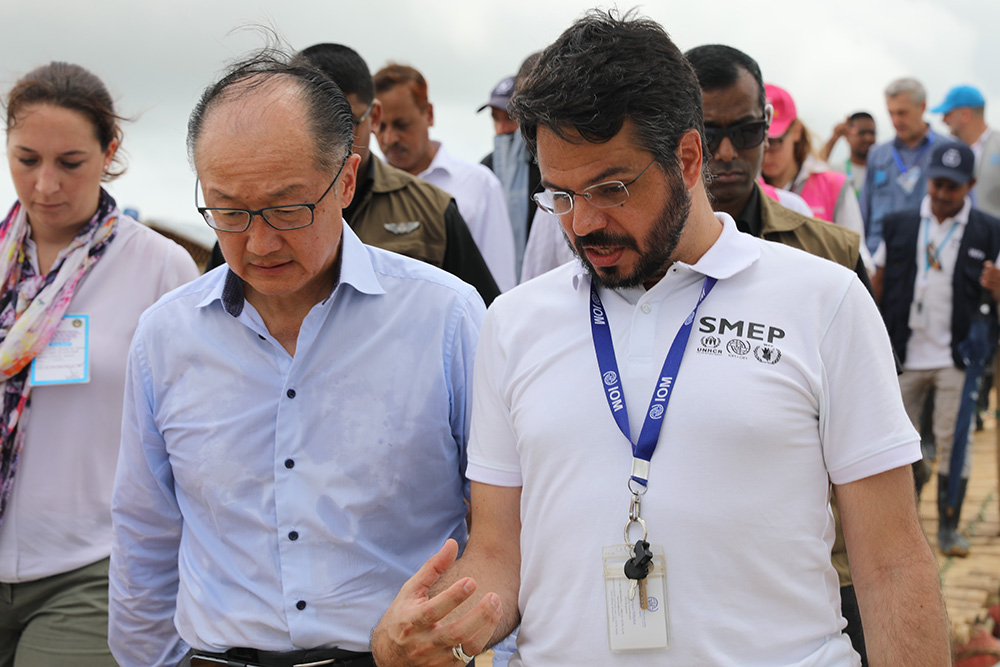 Dr Andrew Mbala, IOM’s Emergency Health Programme Coordinator in Cox’s Bazar, told Mr Guterres and Mr Kim how every day the clinic’s staff of 30 see between 150 and 200 children, women and men, in need of health care. Critical cases are referred to sub-district facilities.

The health facility played a critical role during a recent diphtheria outbreak, providing isolation wards for specialist treatment. It currently hosts a centre for rehydration treatment for those suffering from acute watery diarrheal diseases – a serious threat to life during monsoon conditions.

Dr Mbala and Dr Raisal Islam, a medical officer who has worked at the clinic since its inception, showed Mr Guterres and Mr Kim the range of services available, including mental health services, 24-hour care, and maternity support, including over 20 neonatal visits a day. In the past two months, the clinic has registered a 60 percent increase in maternal deliveries.

After the visit Dr Mbala said: “We are grateful for Mr Guterres’ support. Our medical staff here work tirelessly to support tens of thousands of people with vital health services. But at present our medical response is critically underfunded. That is putting services and potentially lives at risk, especially at peak times during emergencies.”