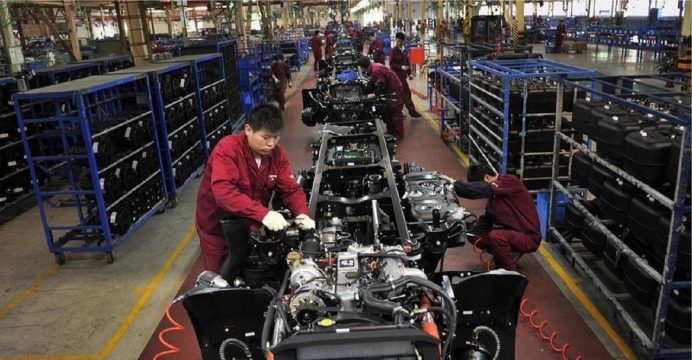 Chinese factory activity slowed in June, dropping from an eight-month high the previous month official data showed on Saturday, missing expectations as the world’s second-largest economy faces the prospect of a trade war with the US.

The Purchasing Managers’ Index (PMI), a key gauge of factory conditions, came in at 51.5 in June, decelerating from 51.9 in May, the National Bureau of Statistics (NBS) said.

The number was below the 51.6 reading tipped in a Bloomberg News survey of economists. Although the numbers indicate a slowdown, they held comfortably above the 50-point mark that separates expansion from contraction and were higher than the NBS’s average reading of 51.3 for the first half of the year, reports BSS.

The declining figures come as trade tensions with the US have cast a shadow on China’s export-oriented manufacturing sector, with both sides threatening potentially damaging tariffs on billions of dollars worth of goods.

Nevertheless, “the manufacturing industry’s fundamentals are on the whole trending positive,” NBS analyst Zhao Qinghe said in a statement, adding that “manufacturing and demand are expanding at an overall steady pace.”

Last Sunday, China’s central bank said it would reduce the reserve requirement ratio for most banks in an effort to free up funding for small firms. The move will not necessarily pay off, however.

“Looking ahead, we see increasing headwinds to the economy in the second half of the year from slowing credit growth,” Capital Economics said in a research note, adding that the risk of a China-US trade war is “adding to the uncertainty.”