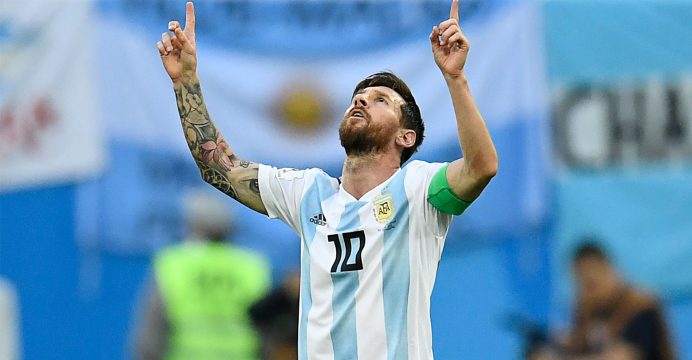 Lionel Messi left an Argentinian journalist stunned after revealing he actually wore the lucky ribbon given to him on behalf of his mother.

After a rough start to his 2018 World Cup campaign, Lionel Messi has settled in a bit, showing off his otherworldly abilities with his opening goal against Nigeria on Tuesday that helped Argentina secure a spot in the knockout round of the tournament.

Argentina opened the tournament with a disappointing draw against Iceland, prompting a reporter to pass along a good-luck charm to Messi. After Argentina defeated Nigeria on Tuesday, advancing to the knockout stage, the reporter Pantorotto brought up the good-luck charm, which he had received from his mother, only for Messi to reveal that he wore the charm around his ankle during the match and was still wearing it.

Reporter Pantorotto said while giving to messi: “My mum told me to give this to you, my mum loves you more than she loves me. I carry her red ribbon for good luck, if you want it, I can give it to you. It’s from my mum so make sure to keep it safe because you’re kind of jinxed now.”

Messi took the ribbon and nothing more was thought of it, but then on Tuesday, following the euphoric victory over Nigeria, Pantorotto again stopped him in the mixed zone.

“I don’t know if you remember, but my mother gave you a ribbon,” he said.

Then, with a smile, Messi replied “look at this”, before pulling down the sock on his left foot and revealing the same red ribbon tied around his ankle.

Pantorotto then turned to the camera in complete disbelief before saying: “Mum, Messi wore it!”