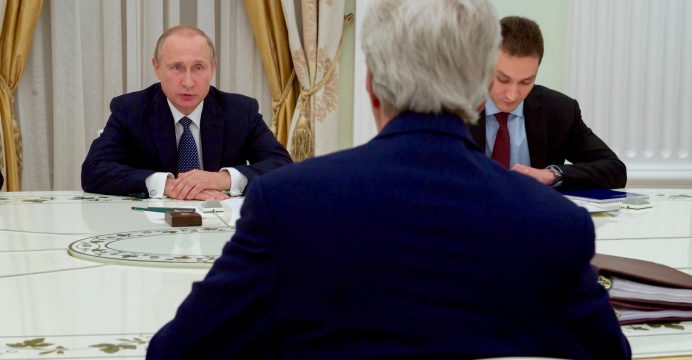 Britain, which has condemned Russia over the nerve agent poisoning of an ex-spy, is pushing to give more teeth to the global chemical weapons watchdog so that it can identify those responsible for attacks with banned toxic substances.

The 20-year-old Organisation for the Prohibition of Chemical Weapons, which oversees a 1997 treaty banning the use of toxins as weapons, is a technical, scientific body which determines whether chemical weapons were used.

But it does not have the authority to identify perpetrators.

A British-led proposal, which is backed by Western powers including France, Germany and the United States, but opposed by Russia, Iran and Syria, was to be debated at a special session of the OPCW starting on Tuesday. The proposal would give the world body greater powers to assign responsibility for violations of the Chemical Weapons Convention.

“Attribution goes beyond the mandate of the OPCW,” the Russian delegation said on Twitter. “The decision to create such a mechanism within the OPCW cannot be made at the special session” being held in The Hague.

The meeting was stalled for nearly three hours by procedural bickering, with Russia and its allies questioning the rules on voting rights until the United States forced a vote to have the agenda adopted. It passed by a wide majority.

The draft proposal circulated by Britain, a copy of which has been seen by Reuters, would thrust the OPCW to the forefront of the diplomatic confrontation between the West and Moscow which has seen relations deteriorate to their lowest point since the Cold War.

The logo of the Organisation for the Prohibition of Chemical Weapons (OPCW) is seen during a special session in the Hague, Netherlands June 26, 2018. REUTERS/Yves Herman
Russia and Indonesia submitted rival proposals, but Western diplomats said they were not believed to have strong political backing.

It comes as OPCW inspectors prepare a report on an alleged poison attack in the Douma enclave near Damascus, Syria, in April that killed dozens and triggered air strikes by the United States, France and Britain.

Up to now it has fallen to the United Nations, where a joint OPCW-U.N. team known as the Joint Investigative Mechanism (JIM) was created in 2015, to identify individuals or institutions behind chemical weapons attacks in Syria.

The JIM confirmed that Syrian government troops used the nerve agent sarin and chorine barrel bombs on several occasions, while Islamic State militants were found to have used sulfur mustard.

But at a deadlocked U.N. Security Council, the JIM was disbanded last year after Moscow used its veto to block several resolutions seeking to renew its mandate beyond November 2017.

The new British-led proposal, which so far has the support of 21 other states, comes after a steady increase since 2012 of the use of chemical weapons, mainly in the Syrian civil war, but also in Iraq, Malaysia and England.

“The widespread use of chemical weapons by Syria in particular threatens to undermine the treaty and the OPCW,” said Gregory Koblentz, a non-proliferation expert at George Mason University, in the U.S. state of Virginia.

The proposal is expected to be submitted by British Foreign Secretary Boris Johnson on Tuesday in The Hague and voted on by OPCW members on Wednesday, sources told Reuters.

Decisions must win two-thirds of votes cast to be passed.

The British proposal condemns the use of nerve agent Novichok in the poisoning of ex-spy Sergei Skripal, the assassination with VX nerve agent in February 2017 of the half-brother of North Korean leader Kim Jong Un in Malaysia and the use of sulfur mustard gas by Islamic State fighters in 2015 and 2016 in Syria and Iraq.

Under the British proposal, the text of which could change before it is voted on, the head of the OPCW would establish a body “with a view to facilitating universal attribution” for attacks globally.

About 140 out of the 193 OPCW members had registered to participate in the conference, which could run until Thursday.