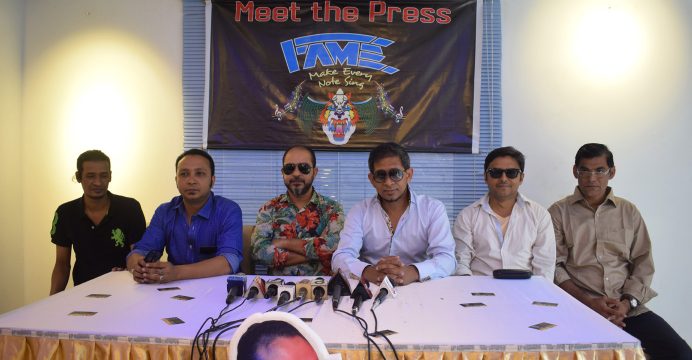 Mymensingh got its FAME back after 24 years

The boys who promised that every note will sing one day, are back in town after a long 24 year Pause. Bangladeshi renowned band FAME declared it returns in a Press Conference at Mymensingh.

In the early 90s, Mymensingh’s band music history started. 5 young soul started to live there dream by founding Mymensingh First ever and one of the most famous Musical band which is known as FAME. At that time there was nothing like YouTube, Facebook for entertainment, But 5 boys known as Tomal, Shumon, Munna, Panna and Masum founded a dream which leads the youth of Mymensingh into another world where music teach you how the way of life.

Just a couple of days before the show, all the tickets were sold out, Which creates a great disputation in music fans. Police and BDR (currently known as BGB) have to be deployed to stop the chaos of the fans who did not get show tickets.

In the mid-1994 band team FAME stumble because the guitarist and vocal Shumon left the country for higher education. In this time they decided to slow down Feme’s activities, but they have been practiced regularly. All members started to collect various sophisticated and modern instruments to fulfill the band. In the context of Bangladesh, Fame is one of the top five best-known bands in the country how owns most sophisticated instruments.

After long 24 years, 2018 became another milestone for the band. The guitarist Shumon decided to settle back in Bangladesh again. After his return, the band decided to reload the team spirit again by starting it again with full pace.

Fame promised to give back the city it’s old golden times again and after 24 years Mymensingh City got its FAME back.