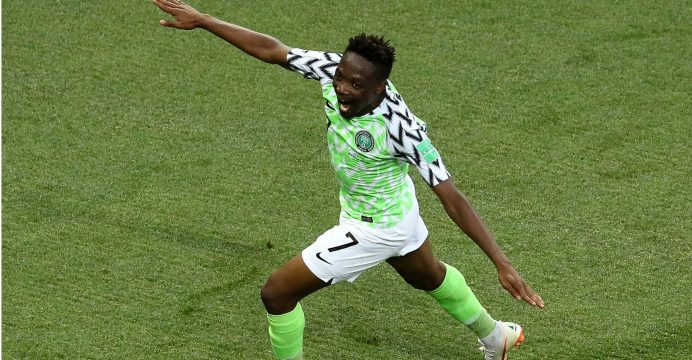 Ahmed Musa’s two-goal show in Nigeria’s win over Iceland on Friday earned him a new nickname in Argentina – Lionel Musa.

But the Super Eagles’ World Cup hero has warned that his new-found hero status in South America will be short-lived.

Barcelona star Lionel Messi has long been regarded as the ‘greatest of all time’ by devoted fans but some Nigerian supporters have now told Argentina’s faithful that “our GOAT is better than your GOAT”.

Could Musa now lend credence to that claim by helping Nigeria knock out the 2014 runners-up and send the Super Eagles into the last 16?

After Argentina’s dismal defeat by Croatia, victory for Iceland would have left them needing a miracle to stay in this year’s World Cup.

Musa’s heroics kept Argentina’s hopes alive heading into their final Group D game, although they must beat Nigeria on Tuesday – and better Iceland’s result against Croatia – to avoid an early exit.

After scoring twice against Iceland, Ahmed Musa has more goals in this World Cup than the likes of Messi, Sergio Aguero, Edison Cavani and Luis Suarez.

Messi had 11 shots in Argentina’s opener against Iceland without scoring, as did Cristiano Ronaldo when Portugal faced the so-called ‘minnows’ in Euro 2016. But Musa scored twice from three shots on Friday.

That also made the Leicester City striker, who returned to CSKA Moscow on loan last season, the first Nigerian to score at two World Cups and their all-time record scorer in the finals with four goals overall.

The other two came in Nigeria’s 3-2 defeat by Argentina in the 2014 group stage, so in six World Cup appearances Musa has had two multi-goal games. Messi and Ronaldo have had one each – from 17 and 15 games respectively.

Omens are good for Musa

The earliest Nigeria can come up against Ronaldo’s Portugal is the quarter-finals, but Musa only has to wait until Tuesday to go head to head with Messi in St Petersburg.

As well as scoring twice against Argentina in 2014, Musa scored another double in a pre-season friendly against Barcelona in 2016, just after Leicester signed him from CSKA Moscow.

“Whenever I play against Argentina, or whenever Messi is playing against me, I score,” said the 25-year-old.

Do that and he could become a hero for Argentina’s arch-rivals Brazil too. So what then, Neymar Musa?