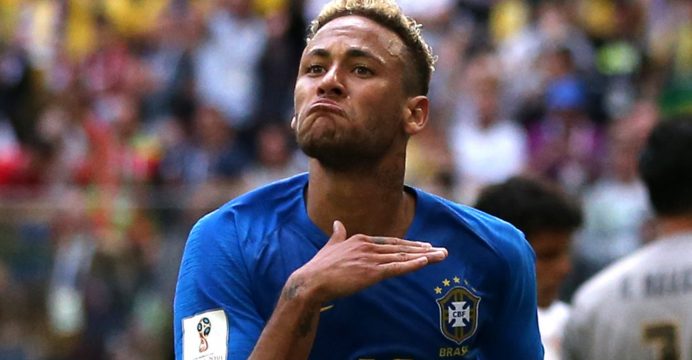 Neymar scored the second injury-time goal in Brazil’s first win of the 2018 World Cup against Costa Rica on Friday.

But no-one was discussing that.

Instead, everyone was focused on the dives, the audacious showboats and the big cry at the final whistle.

Love him or hate him, the world’s most expensive player always gets people talking.

Bringing out the tricks in injury time

Neymar followed up Philippe Coutinho’s injury-time opener with a second in the 97th minute by tapping in Douglas Costa’s cross.

Neymar crying after scoring an essentially irrelevant goal against Costa Rica – the guy is going to be an absolute wreck after he watches Ghost for the first time.

It means the 26-year-old Paris St-Germain star has scored 56 goals in 87 matches for his country – only Pele and Ronaldo have scored more.

But the goal itself paled in comparison to a moment of magic skill, when he hooked a dead ball with both feet – or in football speak, a rainbow flick – over the head of Yeltsin Tejeda and left the Costa Rica substitute’s legs in a tangle.But not everyone was feeling the showboating love. In fact, he was the lowest-scoring Brazil player among BBC Sport users on the player rater with just 3.72 out of 10.

Maybe that’s because of an earlier incident…

The impressive backbend and slow-motion fall fooled referee Bjorn Kuipers momentarily before VAR proved Neymar did go down a bit too easily under pressure from Giancarlo Gonzalez.

Cue outrage from all four corners of the internet.

It was all too much for the lad at full-time. The whistle blew and Neymar dropped to his knees and sobbed into Russian grass.

Yes, it’s only a group match. But this is the World Cup and he’s from Brazil.

In a passionate Instagram post after the game, the forward wrote: “Not everyone knows what I went through to get here…The crying is of joy, of overcoming, and a will to win.”

Some wanted to give the player a big hug. Others were feeling less generous.