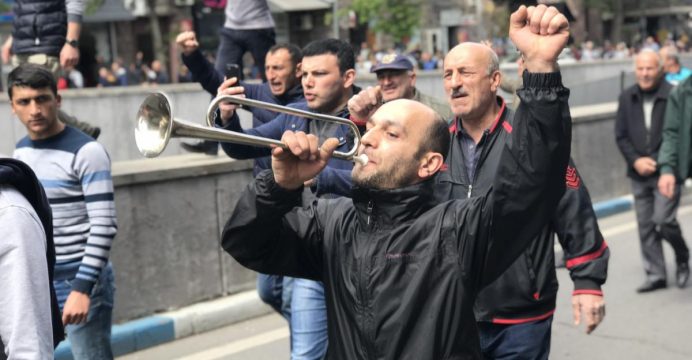 Police in Kazakhstan detained dozens of people at an anti-government rally on Saturday organised by an exiled opponent of the veteran president, Nursultan Nazarbayev.

Mukhtar Ablyazov, a former tycoon and government minister, started staging rallies in the ex-Soviet republic earlier this year after claiming to have recruited thousands of supporters through social networks and messenger apps.

A few dozen people had gathered on Saturday for the rally in downtown Almaty, the Central Asian nation’s biggest city. Police quickly moved to detain almost everyone at the location, including those who said they were only passers-by.

Ablyazov’s Democratic Choice of Kazakhstan (DVK) movement said through social media that some protesters were also detained at a similar rally in Astana, the Kazakh capital.

The DVK said it would forward its supporters’ complaints to the European Parliament and the Parliamentary Assembly of the Council of Europe where Kazakhstan is due deliver a human rights report next week.

Wanted at home on fraud and embezzlement charges, Ablyazov lives in France, where a court has refused to extradite him. He has dismissed all charges against him as politically motivated.

Nazarbayev, 77, who routinely wins elections with more than 90 percent of the vote, appointed Ablyazov as energy minister in the 1990s, but their relations later soured.

Kazakh authorities say Ablyazov instigated and bankrolled a series of protests across the country in 2016 that forced Nazarbayev to delay unpopular land-ownership reforms.

This year, Ablyazov has already called for three rallies, although no-one appeared to have shown up for one of them in Almaty.