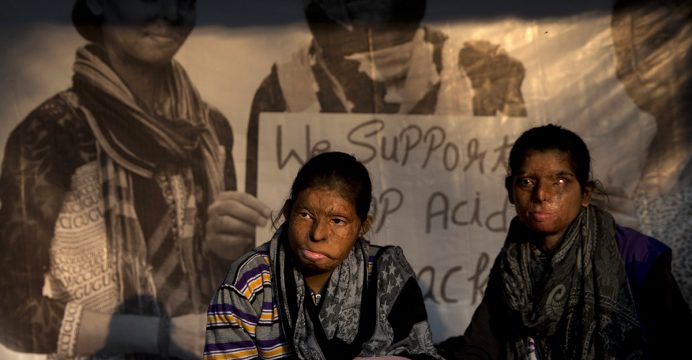 A man allegedly threw acid on her sister-in-law on a busy street around 8:30 pm on Friday night in Delhi’s Mangolpuri area.

The reason is said to be a property dispute and the man’s wife and two brother-in-laws are allegedly involved in the plot.

The woman has suffered burns on the right side of her face and chest, her husband told ANI. “I run a bangle shop in the main market. During evenings, my wife comes to the market to take money from me to buy vegetables. She did not come yesterday so I went to check. Unable to find her on the way, I returned.”

“After some time, a neighbour came to inform that someone has thrown acid on her face and she is lying on the road.” He rushed to find that a police vehicle was there and a lot of people had gathered around her. She was immediately taken to Sanjay Gandhi hospital in Mangolpuri,” he added.

In the hospital, his wife told him that the attack was committed by his brother. “Your younger brother has thrown acid on me. Accompanying him were his wife and two brother-in-laws,” she told me, the husband said.

The incident is the result of a family and property dispute, the husband alleged, adding that his brother has been threatening to harm his family since a long time. The matter has been reported to the police. The police is on a lookout for the attacker who is currently absconding.