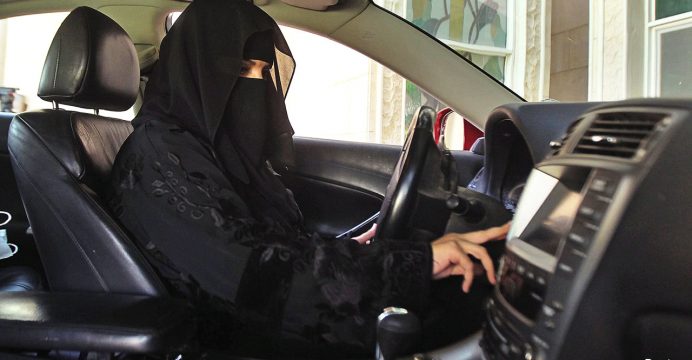 Saudi women still must take a back seat to men

With her bubble-gum pink hair and stylishly ripped jeans, Doaa Bassem goes a long way to redefining what it means to be a Saudi woman these days.

At age 14, she learned how to change the oil of her father’s car and dreamed of owning a classic Trans Am. Although she assumed she would be barred from driving the sleek, loud muscle car, she wanted the fun of taking the engine apart and rebuilding it.

By 17, she had entered into an arranged marriage. Within a year, she had given birth to a child, divorced, then remarried and divorced again.

Now, at 29, she is a single mother who works, lives on her own and plans to be among the first women who take to the streets on Sunday, the first day they will be legally permitted to drive in Saudi Arabia, an absolute monarchy that is the last country in the world to bar women from driving. Bassem won’t be behind the wheel of a sports car, though. She will be riding a Harley. 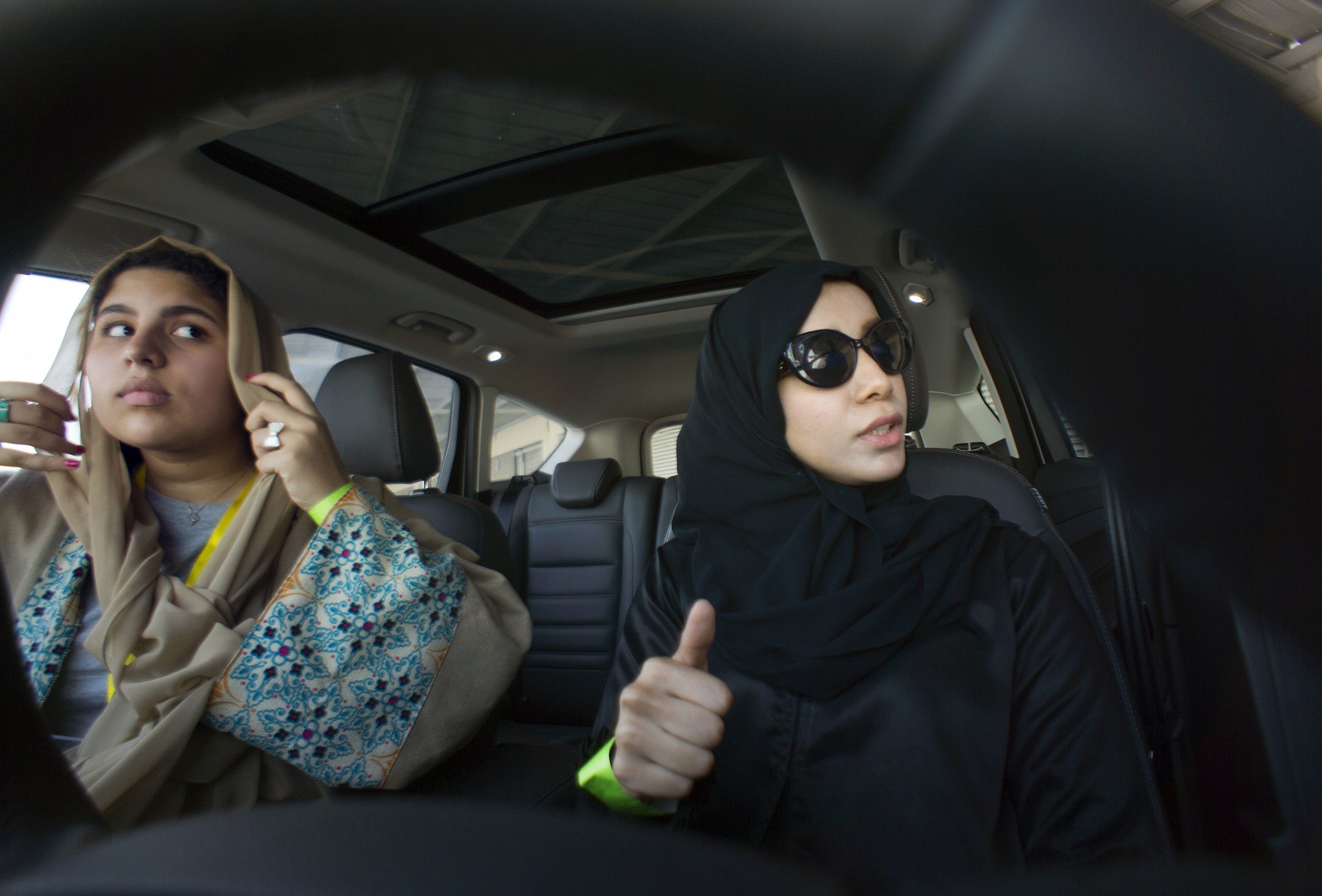 “I’ve always been a tomboy and a rebel,” she said. “Now, others are thinking more like me. Parents have started to understand that marriage isn’t everything, that girls might want a different life. And society is starting to accept this too.”

According to the Saudi ruler, King Salman bin Abdulaziz, his son, Crown Prince Mohammed bin Salman, and their many supporters, the monarchy is verging on a great feminist leap forward. The change reflects the tectonic shifts in a society that have helped women reach the pinnacles of academic and professional success, combined with the effects of globalization, which have brought more openness to the kingdom than at anytime in its recent history.

The new law allowing women to drive removes a lightning rod for critics and allies who have long derided the Saudis, a bastion of conservative Islamic orthodoxy, for following a repressive practice embraced by groups like the Taliban and the Islamic State group. The new law also dovetails with the monarchy’s ambitious economic changes that aim to wean Saudi Arabia, OPEC’s top producer, from dependence on oil and to diversify the economy — shifts that require women to be workers and consumers.

However, while the joy shared by tens of thousands of Saudi women over the right to take the wheel is undeniable, a bright red line keeps them from equality — the restrictive guardianship system. It is a mix of law and custom under which women remain dependents of male relatives — a father, husband, brother, uncle or son — their whole lives.

Guardianship ensures that the gender balance of power at home, work and perhaps even on the roads favours men by allowing them to consent — or not — to letting their women work, travel or receive medical care.

Beneath her free-spirited life, Bassem is legally tied to the consent powers of her brother, her current guardian, who has respected her choices. He helped find a progressively minded landlord to rent an apartment to her and acts as her guarantor. “People get nervous when ladies live alone,” she said.

The rulers have announced that Saudi women will not need a guardian to apply for driver’s education or receive a driver’s license. But that is one of the rare exceptions where men have no role over women’s lives.

Saudi citizens still need to contend with the top-down system of governing in which they all are vulnerable to royal commands, whims and punishments.

Among those women who will not be celebrating on the streets this Sunday are the pioneers who broke social and legal taboos decades ago with their protests demanding the right to drive. Last month, Saudi officials arrested a group of well-known feminists, among them some veterans of a 1990 protest, in what was seen as a warning to them not to take credit for the end of the driving ban.

Eight leading women’s rights activists remain behind bars, according to Amnesty International. They are facing serious charges, including spying and sedition.

“There is no doubt that there is a deep transformation happening in Saudi now,” said Kristin Smith Diwan, the senior resident scholar at the Arab Gulf States Institute in Washington. “But we are also witnessing a horrible crackdown on some of the people that made these changes possible. What’s not changing is the nature of authority.”

The crown prince has sent mixed messages about the guardianship system. In interviews with U.S. media, he has declared Saudi men and women absolutely equal. Last year, a royal decree commanded government agencies to allow women access to many services without their guardians — and to list those services to thwart bureaucratic abuses. The lists, however, have not yet been made public.

The structure of the guardianship system, which in many ways mimics the ruler’s power over his subjects, means that individual freedom for women is precarious. Last year, a chilling case came to light when a 29-year-old woman, Maryam al-Otaibi, ran away from home, where she claimed male relatives had abused her. She fled to Riyadh, the capital, but her father — her legal guardian — filed a criminal complaint, saying she had been “disobedient” after he commanded her to return home. She was jailed for more than 100 days before she won the right to break free from him.

Many women in the fields of social work, women’s empowerment and family law prefer to focus on the gains women have achieved, not the limitations that remain.

Since the crown prince took power last year, judges who once would have automatically given fathers custody of children in divorce cases have started allowing some mothers custody instead. Women no longer need a guardian to register a business. More private companies are hiring women for technical and manual labour jobs, helping pull poor families or single mothers up the socio-economic ladder.

Salma al-Rashid, chief programs officer at Al Nahda Philanthropic Organization for Women in Riyadh, which for more than 50 years has been working with disadvantaged women and families, pointed to recent legal changes that have improved financial and emotional security for a majority of Saudi women, whose lives bear no resemblance to the stereotypical wealthy Saudi resident.

A catalyst of social change, Rashid said, is the growing number of Saudi women who are graduating from college, traveling abroad on scholarships and entering the workforce.

“Saudi Arabia is not black and white,” she said. “We are incredibly diverse. The biggest engine that has driven these changes is economical. History shows this is the case everywhere in the world.”

In the eastern province city of Al Khobar, Seham al-Amri, 39, is one of a significant number of Saudi women who have capitalized on the changes to make a better life.

From the time she was young, she was the clever one in her family. She attended a public university and studied Arabic literature, married at 19, raised five children and taught at a girls’ school.

Three years ago, however, when the kingdom was pushing businesses to hire more Saudi citizens, she sought work in the private sector, where pay was much higher and opportunities for women were growing. A leading telecom company offered her a sales position, but Amri’s husband — her guardian — refused to consent.

Amri went behind his back. She took her brother to the company to act as her guardian, and she got the job. Her stellar sales record made her a standout candidate this spring when car companies were seeking Saudi women to help sell vehicles to the rush of new drivers they were expecting.

Her husband still disliked the idea, she said, but her new company, the Saudi owner of the Range Rover franchise, did not ask her for a guardian’s approval.

She sold seven cars in her first three weeks. Her husband, she said, likes the larger paycheck she brings home. He also has grudgingly accepted her work because relatives and neighbours have not gossiped about it. “He didn’t want any shame on the family,” she said. “As for my family, they are all as proud as can be.”

A Saudi public opinion poll, commissioned in February by Uber, showed that more than 90 percent of respondents felt positively about lifting the driving ban.

That has not diminished the sexism. A popular preacher last year strongly opposed letting women drive, saying their brains were half the size of men’s. Several men said this week that they would stay home Sunday, convinced that car accidents — already a problem in the country — would surge.

The planned rollout for female drivers, despite months of buildup, has hit several bumps, partly because of insufficient driver’s education programs and the overlapping bureaucracies needed to fulfil the royal decree.

The government has said that women with valid licenses from abroad may obtain a Saudi license with minimal fuss. Several hundred will be ready to drive Sunday.

Yet for tens of thousands of others, the path to driving has been full of obstacles. Only a limited number of training courses have opened for women — and given the strict gender segregation in effect in schools and government agencies, it is challenging to staff them.

Earlier this year, pilot driver’s education programs were scrambling to find qualified women to instruct their Saudi sisters. That is how Sheikha al-Kadeeb, 29, who had been looking for work in finance, was recruited to teach driving.

Kadeeb learned in Los Angeles, where she earned an MBA. She loved cruising California freeways in her Jeep Wrangler and jumped at the opportunity to impart her enthusiasm at home. “I feel like I’m on a mission,” she said. “I get a chance to help my country.”

Parents and family members, meanwhile, have worried about what would happen to women if their cars broke down or police pulled them over. Casual encounters with strange men are discomfiting to many Saudi women. Nor are some willing to risk the physical threats of being stuck alone.

Another problem is the cost of driver’s education for women, which is four to five times as expensive when compared with what men pay.

Mohammed al-Ghanami, a diving instructor for the Saudi Marines, has been giving his wife lessons in remote areas where police or other motorists will not disturb them. He moonlights as an Uber driver and wants his wife to be able to drive their child to the doctor or anywhere else in an emergency, given his extended absences.

Groups of girlfriends, meanwhile, are making celebratory plans for their first drive. Rezan Ben Hassan, 29, learned when she was 16 on desert camping trips with her family. She intends to take the keys to the family vehicle Sunday and cruise to a cafe.

In Al Khobar, Bassem, the motorcycle lover, plans to hit the road with friends from the local Harley Davidson club. Of their roughly 700 members in Saudi Arabia’s Eastern province, a handful of women love Hogs.

In what appears to be an attempt to dissuade unqualified drivers Sunday, the Ministry of Interior announced that police would be fining drivers caught without a license 900 riyals, or approximately $240.

The lack of an official license, however, is not discouraging Bassem. “This is going to be one of the most exciting days of my life,” she said.