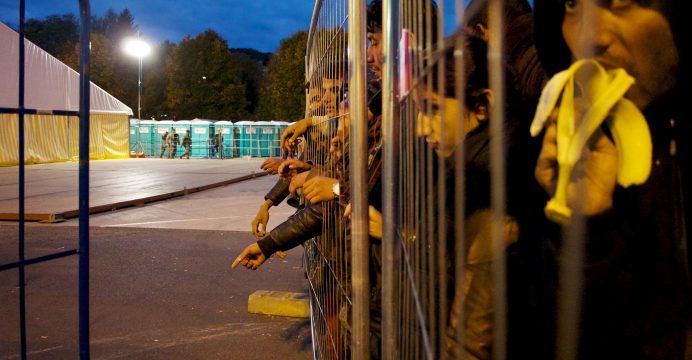 Several European leaders including those of France, Germany, Italy and Austria will hold talks on Sunday on migration, an issue bringing bitter political divisions to a head in Europe and increasingly in the United States.

Sources said the leaders of Greece and Bulgaria would also attend the gathering, which will explore how to stop people from moving around the European Union after claiming asylum in one of the Mediterranean states of arrival.

Sunday’s talks, announced by the executive European Commission, precede a June 28-29 EU summit at which leaders will try to agree a joint migration policy three years after more than a million people poured into Europe, mostly fleeing conflict in the Middle East and Asia.

The development coincides with an international outcry over the Trump administration’s policy of separating migrant families at the Mexican border, as videos emerged of youngsters held in enclosures far from their parents, and an audio of wailing children went viral.

Immigration is increasingly shaping politics in rich countries, and in Germany, the EU’s wealthiest economy, threatens to wreck Chancellor Angela Merkel’s relationship with her CDU’s Bavarian sister party, part of her coalition.

The Christian Social Union (CSU) on Monday gave Merkel two weeks to get a Europe-wide deal.

Horst Seehofer, CSU leader and Germany’s interior minister, wants to turn away migrants who have already registered in other EU states, but Merkel opposes any unilateral move to reverse her 2015 open-door policy and undermine her authority.

“We can no longer look on as this refugee tourism across Europe happens,” Bavaria’s CSU interior minister, Joachim Herrmann, told German broadcaster Deutschlandfunk.