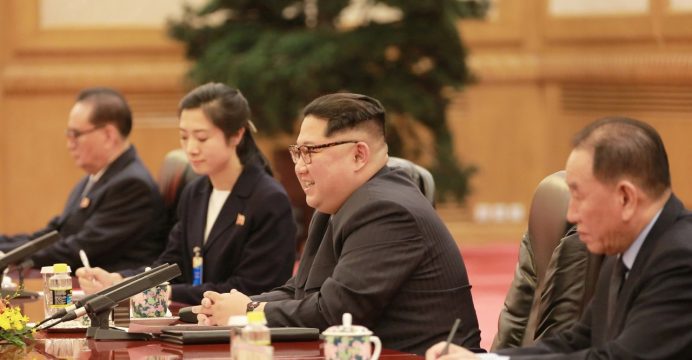 Meeting Kim on his third trip to China this year, and just a week after Kim met Trump in Singapore, Xi said China was willing to keep playing a positive role to promote the peace process on the Korean peninsula.

Kim’s visit was the latest in a flurry of diplomatic contacts, and unlike during his previous two visits to China, the government announced his presence while he was in the country rather than waiting for him to leave.

Xi told Kim that he was very happy to see the “positive” outcome of his meeting with Trump, and the important consensus reached on denuclearization and setting up a lasting peace mechanism, according to Chinese state television.

“No matter the changes in the international and regional situation, China’s party and government’s resolute position on being dedicated to consolidating and developing Sino-North Korea relations will not change,” the report cited Xi as saying.

Kim told Xi he hoped to work with China and other parties to push the peace process, Chinese state television said.

While not formally billed as a state visit, China gave Kim most of the trappings of one, including a welcome ceremony with honor guard in Beijing’s Great Hall of the People.

Xi greeted Kim warmly, in images carried on state television. The two men were accompanied by their wives.

Xi said he was pleased to see North Korea’s decision to promote economic reforms, adding that China’s own reform and opening up process had meant the Chinese people’s eyes had been open to the world.

Trump agreed to work with Kim toward complete denuclearization of the Korean peninsula, committed to provide the North with security guarantees and pledged to end “war games” with South Korea, which North Korea and China have long seen as provocative.

South Korea and the Pentagon announced they would halt the annual Freedom Guardian military drill scheduled for August.

A Kim trip to China to discuss his summit with Trump had been widely anticipated in diplomatic circles. China is North Korea’s most important diplomatic and economic backer but has been angered by its nuclear and missile tests.

“We hope Chairman Kim Jong Un’s visit will contribute to that.”