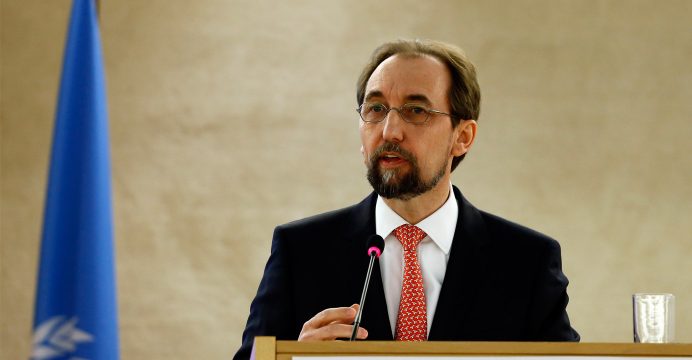 The UN rights chief on Monday condemned the “unconscionable” separation of migrant children from their parents at the US border, as First Lady Melania Trump made a rare political plea to end the deeply controversial practice.

The “zero-tolerance” border security policy implemented by President Donald Trump’s administration has sparked tears among migrant families and outrage on both sides of the political aisle.

It took on particular resonance as America celebrated Father’s Day.

“The thought that any state would seek to deter parents by inflicting such abuse on children is unconscionable,” Zeid Ra’ad Al Hussein said as he opened a session of the UN Human Rights Council in Geneva.

He called for Washington to immediately end the practice of “forcible separation of these children.”

Democrats, meanwhile, stepped up their opposition to the policy, describing it as “evil.”

“They call it ‘zero tolerance,’ but a better name for it is zero humanity, and there’s zero logic to this policy,” said Senator Jeff Merkley of Oregon, after leading a group of Democratic lawmakers to the Mexican border.

They toured a converted Walmart supermarket that is now housing about 1,500 immigrant children, after which Merkley said “hurting kids to get legislative leverage is unacceptable. It is evil.”

Bracing for more child arrivals, the government plans to build camps at military bases in Texas.

Authorities said that during one recent six-week period nearly 2,000 minors were separated from their parents or adult guardians — a figure that only stoked the firestorm.

Trump has said he wants the separations to end but continues to blame opposition Democrats for the crisis, which critics say is of his own making.

Amid deep divisions, congressional Republicans have struggled to craft a viable immigration plan.