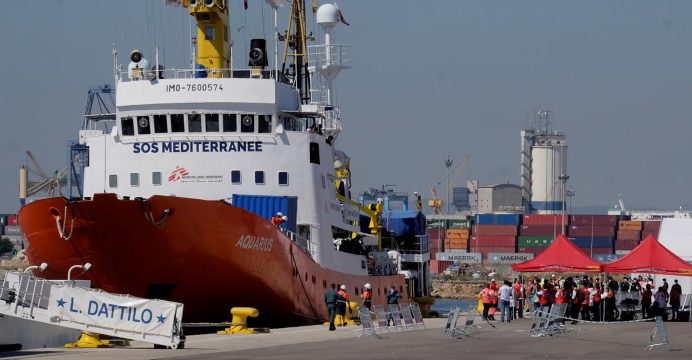 Migrant boat turned away by Italy arrives in Spain

A migrant rescue boat turned away by Italy and Malta arrived at the Spanish port of Valencia on Sunday, ending a grueling voyage which has made it a symbol of Europe’s failure to agree on immigration.

But the plight of the Aquarius, run by Doctors Without Borders (MSF) with Franco-German charity SOS Mediterranee, highlighted the European Union’s failure to agree on how to manage the huge influx of people fleeing poverty and conflict.

In Valencia, officials in white protective suits and masks greeted the migrants as they debarked and police started identifying them and processing their information.

The Aquarius arrived carrying 106 people rescued from unstable boats near Libya. The others had been transferred to an Italian coast guard vessel and a ship belonging to the Italian navy to make the journey safer.

The coast guard boat was the first to arrive, docking in the eastern port with 274 on board just after dawn.

Shouts and singing erupted on the ship as the migrants on board saw Valencia on the horizon, Spanish journalist Gabriela Sanchez tweeted from another boat traveling alongside it.

A staff of 2,320, including volunteers, translators and health officials, were waiting on shore. Red Cross Secretary General Elhadj As Sy was also in Valencia for the arrival.