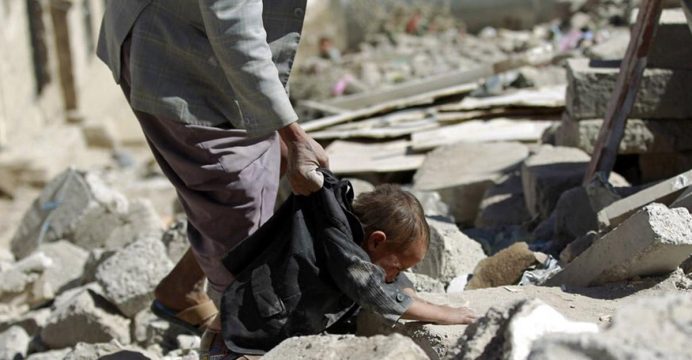 A Saudi-led alliance of Arab states launched an attack on Yemen’s main port city on Wednesday in the largest battle of the war, aiming to bring the ruling Houthi movement to its knees at the risk of worsening the world’s biggest humanitarian crisis.

Fighting raged near Hodeidah airport and al-Durayhmi, a rural area 10 km (6 miles) south of the city, media controlled by the Arab states and their Yemeni allies reported.

The assault marks the first time the Arab states have tried to capture such a heavily-defended major city since joining the war three years ago against the Iran-aligned Houthis, who control the capital Sanaa and most of the populated areas.

The United Nations says 8.4 million Yemenis are on the verge of famine, and for most the port is the only route for food supplies.

The U.N. Security Council is due to meet behind closed doors on Thursday – at the request of Britain – over the attack on Hodeidah, diplomats said.

The Houthis deployed military vehicles and troops in the city center and near the port, as warplanes struck the coast to the south, a resident speaking on condition of anonymity told Reuters. People fled by routes to the north and west.

Residents emerged from homes in the late afternoon to shop for food before the breaking of the Ramadan fast, he said.

CARE International, one of the few aid agencies still there, said 30 air strikes hit the city within half an hour. “Some civilians are entrapped, others forced from their homes. We thought it could not get any worse, but unfortunately we were wrong,” said CARE’s acting country director, Jolien Veldwijk.

“Under international humanitarian law, parties to the conflict have to do everything possible to protect civilians and ensure they have access to the assistance they need to survive,” said Lise Grande, U.N. humanitarian coordinator for Yemen.