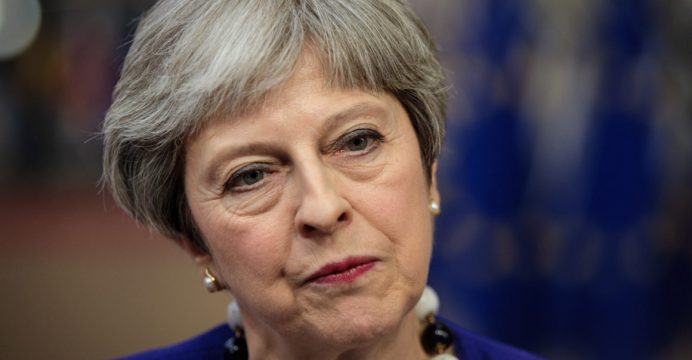 British Prime Minister Theresa May faces a showdown on Tuesday with lawmakers who want power to force her government to go back to the negotiating table if they reject a Brexit deal, testing her plans for leaving the European Union.

On the first day of votes that could further complicate her tortured negotiations to quit the EU, parliament will debate a demand for a “meaningful vote” on any agreement May negotiates with Brussels before leaving the bloc next March.

Such a vote would give the lower house of parliament more power to set the government’s “direction” if lawmakers reject the agreement, which could mean sending May back into negotiations with EU officials just months before Britain is due to leave.

May says her Brexit blueprint, or EU withdrawal bill, offers lawmakers a meaningful vote on a final deal when they can either accept or reject it, which would see Britain crash out.

Beyond that, her Brexit minister David Davis told BBC radio the government would never allow lawmakers to reverse Brexit.

“Whatever we do, we’re not going to reverse that,” Davis said. “A meaningful vote is not the ability to reverse the decision of the referendum.”

Conservative Party officials have been frantically lobbying lawmakers to support the government in a series of votes on amendments handed down from the upper house of parliament on the EU withdrawal bill, which will sever ties with the EU by copying and pasting the bloc’s laws.

May made a last-ditch appeal to lawmakers on Monday and Davis sent a letter making the same case – vote against the prime minister and risk tying Britain’s hands in the Brexit negotiations.

The government has also tried to stem rebellions by offering its own options – on the meaningful vote, it has proposed a 28-day breathing space if parliament rejects a Brexit deal.

It is not clear whether that will win over potential rebels, but another proposal for an alternative to an amendment on the customs union which refers only to customs arrangements seems to have won over Conservatives to the government line.

“We are asking members of parliament to abide by the referendum result, our manifesto commitment and to back our country,” Andrew Bridgen, Conservative lawmaker and Brexit campaigner, told Reuters. “It’s not difficult.”

The “meaningful vote” will be the first major test after the House of Lords introduced 15 changes to the bill, trying to reshape the government’s approach to Brexit by encouraging the lawmakers to press for the closest possible ties.

On Tuesday, parliament will also debate other amendments, including a challenge to the government’s plan to put March 29, 2019, or ‘Brexit Day’, into law and an attempt to toughen a commitment to ensure a frictionless border between Northern Ireland and the neighboring Irish Republic, which will remain in the EU.

On Wednesday, parliament will consider a challenge to her commitment to leave the EU’s single market and customs union, which will transform Britain’s future trading relationships for many years to come.

If May is defeated in the House of Commons, it will be yet another blow to a prime minister whose authority has been challenged several times since she lost the Conservative Party’s majority in an ill-judged election last year. She now relies on the support of a small Northern Irish party.

To try to ensure the government wins, ministers and other lawmakers have been told to make sure they will be in parliament for the votes.

“There have been lots of meetings, we are keen to engage with all members of the parliamentary party,” May’s spokesman said. “And I imagine that there will be (more).”