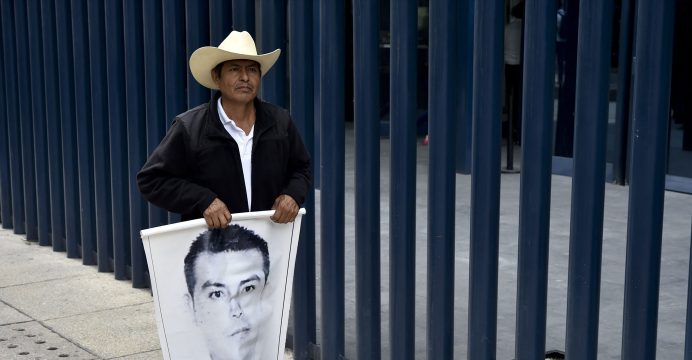 A Mexican tribunal ordered on Monday the creation of an independent commission to investigate the disappearance of 43 students in southern Mexico nearly four years ago, citing shortcomings in the federal prosecutor’s investigation.

The federal tribunal called for the creation of the Investigatory Commission for Truth and Justice, which will be made up of victims’ representatives, the National Human Rights Commission and the Federal Public Ministry.

“The investigation was not quick, effective, independent or impartial on the part of the federal prosecutor” as demanded by international protocol, the tribunal said in a statement.

“It has been determined that there is sufficient evidence to presume that the confessions and accusations against the accused were obtained through torture,” it said.

The Mexican prosecutor’s office said it had not been officially notified of the decision.

The Miguel Agustín Pro Juárez Center for Human Rights, which is representing the victims’ families, has said the prosecutor’s investigation was manipulated by the government to be consistent with the official version of events.

According to the Mexican government, the students, who were studying at a teachers’ training college in Ayotzinapa in the southwestern state of Guerrero, were rounded up by corrupt police who handed them over to a gang that burnt them in a nearby dump.

But in a report released in 2015, international experts flagged deep flaws in the official investigation and rejected its central claim that the victims were incinerated in a garbage dump in Cocula, a city in the Pacific state of Jalisco.

The court’s resolution “confirms that the truth in the case of Ayotzinapa has not been revealed, that the location of the students is not clear and that the current federal government committed multiple irregularities during the investigation,” the Miguel Agustín Pro Juárez Center for Human Rights said in a statement.

The students’ disappearance has been a black mark for the government of Mexican President Enrique Pena Nieto and exposed the relationships between authorities and groups of organized crime in the country.

The tribunal’s decision “gives power to the parents of the youth so that they can contribute evidence as principle actors, which is something that had to happen from the beginning,” said Angela Buitrago, a former Colombian prosecutor.