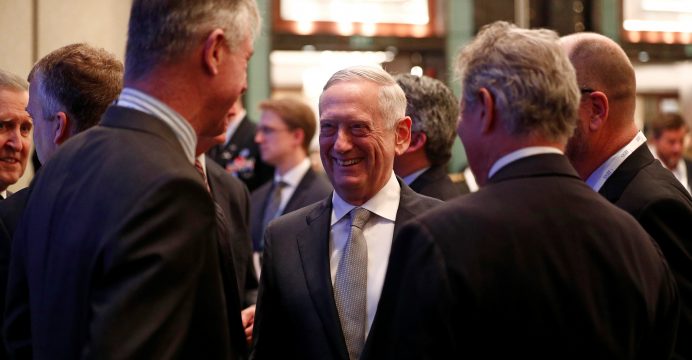 The United States is willing to work with China on a “results- oriented” relationship, but Beijing’s actions in the South China Sea were coercive and the Pentagon would “compete vigorously” if needed, U.S. Defense Secretary Jim Mattis said on Saturday.

The comments by Mattis, speaking at the annual Shangri-La Dialogue in Singapore, come at a time of increased tension between the two nations in the South China Sea and highlight how President Donald Trump’s administration is looking to balance China’s cooperation on North Korea while dealing with its activities in the disputed sea.

“China’s policy in the South China Sea stands in stark contrast to the openness that our strategy promotes, it calls into question China’s broader goals,” said Mattis, who said he would be traveling to Beijing this month.

“The U.S. will continue to pursue a constructive, results-oriented relationship with China, cooperation whenever possible will be the name of the game and competing vigorously where we must … of course we recognize any sustainable Indo-Pacific order has a role for China,” he said.

Last month, China’s air force landed bombers on disputed islands and reefs in the South China Sea as part of a training exercise, triggering concern from Vietnam and the Philippines.

Satellite photographs taken on May 12 showed China appeared to have deployed truck-mounted surface-to-air missiles or anti-ship cruise missiles at Woody Island in the disputed sea.

“Despite China’s claims to the contrary, the placement of these weapon systems is tied directly to military use for the purposes of intimidation and coercion,” Mattis said.

He Lei, the head of the Chinese delegation to the dialogue, said the islands were Chinese territory and it was “a sovereign and legal right for China to place our army and military weapons there.”

“We see any other country that tries to make noise about this as interfering in our internal affairs,” said He, who is deputy president of the Academy of Military Sciences at the People’s Liberation Army.

While the operation had been planned months in advance, and similar operations have become routine, it came at a particularly sensitive time and just days after the Pentagon withdrew an invitation to China for a major U.S.-hosted naval drill.