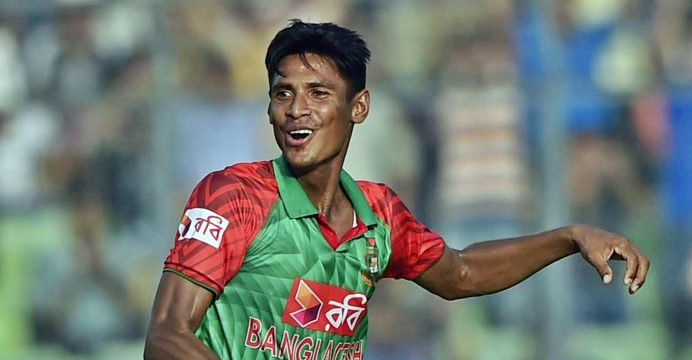 Bangladesh’s T20I skipper Shakib Al Hasan said his team would certainly miss the service of paceman Mustafizur Rahman in the series and at the same time also he urged others to take up the responsibility in the series against Afghanistan.

Shakib was talking to the reporters on Thursday at Shahjalal International Airport before leaving Dhaka to join the squad.

Bangladesh is scheduled to play three Twenty20 Internationals against Afghanistan at Rajiv Gandhi Stadium in Dehradhun, on June 3, 5 and 7.

Bangladesh star pacer Mustafizur Rahman has been ruled out of the Afghanistan series due to a fracture on the big toe of his left foot and the injury will see him sit on the sidelines for three to four weeks. The star pacer succumbed to the injury while playing for Mumbai Indians in an IPL encounter against Delhi Daredevils on May 20.

Mustafizur has huge experience of playing on Indian surfaces having featured in the IPL. In his breakthrough season, he made an enormous impact as his side Sunrisers Hyderabad won the title in 2016. This season he featured in seven matches for his new team Mumbai Indian, picking up seven wickets.

Shakib said it was quite natural for his team to face problems since he is Tiger’s best T20 bowler and his absence would be sorely missed.

However, Shakib insisted that it would present an opportunity for the other bowlers to shine. Shakib also stated that his team would focus to play the series match by match and to begin with a win should be a boost for the series.

The first match is always important as it helps to gather the momentum by staying that if they able to win the opening game then the next two games become much easier,” he concluded.