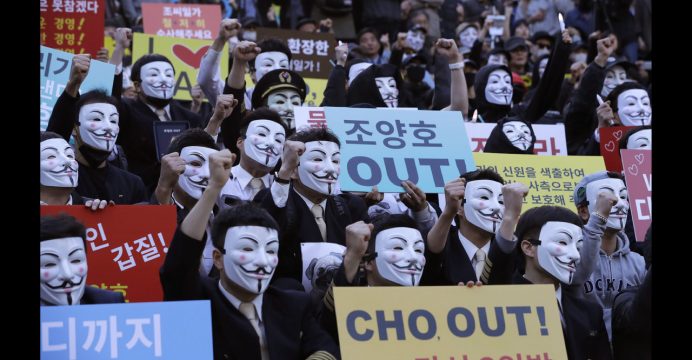 South Korean prosecutors raided the headquarters of Korean Air Lines Co Ltd on Thursday over suspected tax evasion, embezzlement and breach of trust by members of its founding family, in what has become the broadest-ever chaebol probe.

The investigation is the latest involving the family-controlled conglomerate, or chaebol, after a tantrum in April by the chairman’s youngest daughter re-ignited public resentment toward the perceived unchecked behavior of chaebols’ powerful family-owners.

Cho Hyun-min’s alleged throwing of a drink at a business meeting attendee sparked protests which, coupled with a liberal government willing to pursue wrongdoing among the elite, has led to an unprecedented number of family members being subject to multiple investigated simultaneously, analysts said.

Cho Hyun-min is the younger sister of Heather Cho. The elder Cho was jailed in 2014 for demanding a Korean Air Lines plane return to its gate at a New York airport, after losing her temper over the way she was served nuts in a first class cabin

“The family appears to have a lot of issues, as one investigation is leading to another, supported by testimonies from workers,” Park said.

Days later, authorities considered cancelling the license of budget airline Jin Air Co Ltd because Cho’s younger daughter had been a board member despite being a U.S. national – a potential regulatory breach. Chairman Cho subsequently stepped down as Jin Air’s co-chief executive.

“Unless the chairman himself is found guilty of any severe financial crime, for instance, the ongoing probes will have little impact on the family’s control,” Park said. “Even so, members of families running conglomerates are now more cautious about any emperor-style management.”

Separately, Seoul Metropolitan Police Agency said it has sought an arrest warrant for Chairman Cho’s wife, Lee Myung-hee, after securing testimony from 11 people claiming to have been assaulted or verbally abused by Lee.

“Due to uncertainty concerning the founding family, Korean Air shares are undervalued,” said analyst Choi Chi-hyun at Meritz Securities. “Once the governance risk passes, the attractive valuation will come to the fore.”