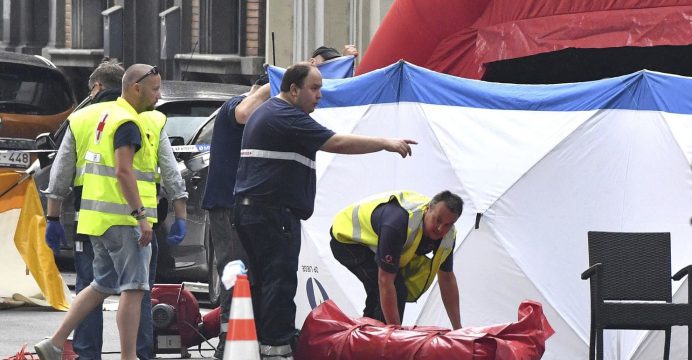 A man killed two policewomen and a bystander in the Belgian city of Liege on Tuesday before being gunned down at a school in what officials say was a terrorist attack by a radicalized “lone wolf” just out of prison.

The man was named by public broadcaster RTBF as a 36-year-old petty criminal and drug dealer who was let out on day-release just on Monday.

A Belgian lawmaker said he had been on an anti-terrorist police watchlist after being radicalized in jail, apparently as a convert to Islam – raising questions about why he seems to have been freed unsupervized and expected to return.

Officials said the man attacked the policewomen, aged 45 and 53, from behind with a knife – described as a box-cutter by RTBF – around 10:30 a.m. (0830 GMT) on a boulevard in the center of Belgium’s third city, near the German border.

After slashing the officers, the man seized their handguns and shot both. He shot dead a 22-year-old trainee teacher who was sitting in a car before entering a high school about 100 meters (yards) away and taking two female employees hostage.

That triggered a major intervention by armed police. Pupils were moved to safety as a gunbattle broke out that sent people in the street racing for cover. Four police officers were wounded before the attacker was finally killed.

“The goal of the assassin was to target the police,” Liege police chief Christian Beaupere told a news conference.

The attacker’s profile showed up concerns about the risks of petty criminals, including those not from Muslim backgrounds, being inspired to Islamist violence while incarcerated. Convicts have been behind several recent attacks in Europe, including some using little more weaponry than a knife or rental truck.

The national crisis center, on high alert since attacks by Islamic State in Paris and Brussels in the past three years, said it had not raised its alert level – an indication the man was acting alone and so follow-up attacks were not expected.

La Libre Belgique newspaper quoted a police source as saying the gunman shouted “Allahu Akbar” – God is greatest in Arabic. Beaupere declined to comment when asked about that.

A Koran and prayer rug were found during a search of his cell, Paris-Match magazine said. Belgian media said he had been put on the radical watchlist last year. De Standaard newspaper said police also suspected him of the murder late on Monday of a criminal associate whose body was found south of Liege.

Confirming that the attacker was on the police watchlist, lawmaker George Dallemagne, who sits on several Belgian parliamentary security committees, tweeted: “The supervision of radicalized prisoners remains tragically flawed.”