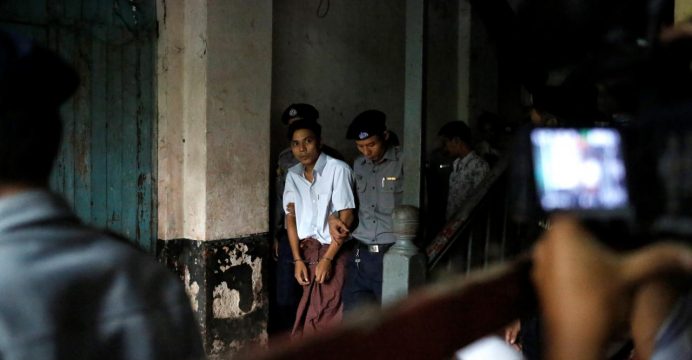 Evidence Myanmar police say they obtained from the mobile phones of two Reuters reporters accused of possessing secret documents might be “tainted”, a defense lawyer said on Tuesday, because at least one phone was used after it was confiscated.

A WhatsApp message was sent from the mobile phone of journalist Wa Lone after he and Reuters colleague Kyaw Soe Oo were arrested on Dec. 12 and held incommunicado on suspicion of violating the Official Secrets Act, the defense told the court.

Prosecution witness Police Major Aung Kyaw San, who said he and other police had examined the phones, told the court he was not aware of the exchange on WhatsApp and did not know who else used the phones before their delivery to investigators on Dec 14.

In what has become a landmark press freedom case, the court in Yangon has been holding hearings since January to decide whether Wa Lone, 32, and Kyaw Soe Oo, 28, will be charged under the colonial-era Official Secrets Act, which carries a maximum penalty of 14 years in prison.

Defence lawyer Than Zaw Aung said the one-word text message – “OK” – was sent via WhatsApp in reply to a question from Reuters’ bureau chief in Myanmar at about 10 p.m., after Wa Lone’s phone was taken from him by police shortly after the two reporters were arrested around 9:10 p.m.

“That means anyone could have access to the phones, so anything could happen to the phones,” a second defense lawyer, Khin Maung Zaw, told Reuters after Tuesday’s proceedings. “All those messages they said were found in the phones may not be genuine or the phones may be tainted.”

Myanmar government spokesman Zaw Htay was not immediately available for comment. Previously, he has declined to discuss details of the proceedings or the police investigation, saying Myanmar’s courts were independent and the case would be conducted according to the law.

Judge Ye Lwin last week accepted as evidence printed copies of documents that Major Aung Kyaw San, a police IT expert, said were found on the reporters’ phones. The documents included alleged confidential government letters and plans for the development of an island off Myanmar’s west coast for tourism.

Some of the documents came from the Facebook Messenger app, the defense has said. Defence lawyers say this means the documents could have been sent by anyone and it was not clear the reporters themselves had even looked at them.

At the time of their arrest, the reporters had been working on an investigation into the killing of 10 Rohingya Muslim men and boys in a village in western Myanmar’s Rakhine state.

The reporters have told relatives they were arrested almost immediately after being handed some rolled up papers at a restaurant in northern Yangon by two policemen they had not met before, having been invited to meet the officers for dinner.

Last month, Police Captain Moe Yan Naing, who Myanmar’s information ministry said was arrested at the same time as the journalists in connection with the case, testified that a senior officer had ordered his subordinates to plant secret documents on Wa Lone to “trap” the reporter.

At a news conference on May 15, Police Director General Aung Win Oo dismissed the testimony as untruthful.

After his court appearance, Moe Yan Naing was sentenced to a year in jail for violating police discipline and his family was evicted from police housing. Police have said the eviction and his sentencing were not related to his testimony.

Global advocates for press freedom, human rights activists, as well the United Nations and several Western countries, have called for the release of the Reuters journalists.

On Tuesday, diplomats from Denmark and the European Union – as well as others – observed the proceedings.

The next hearing in the case is scheduled for Monday.